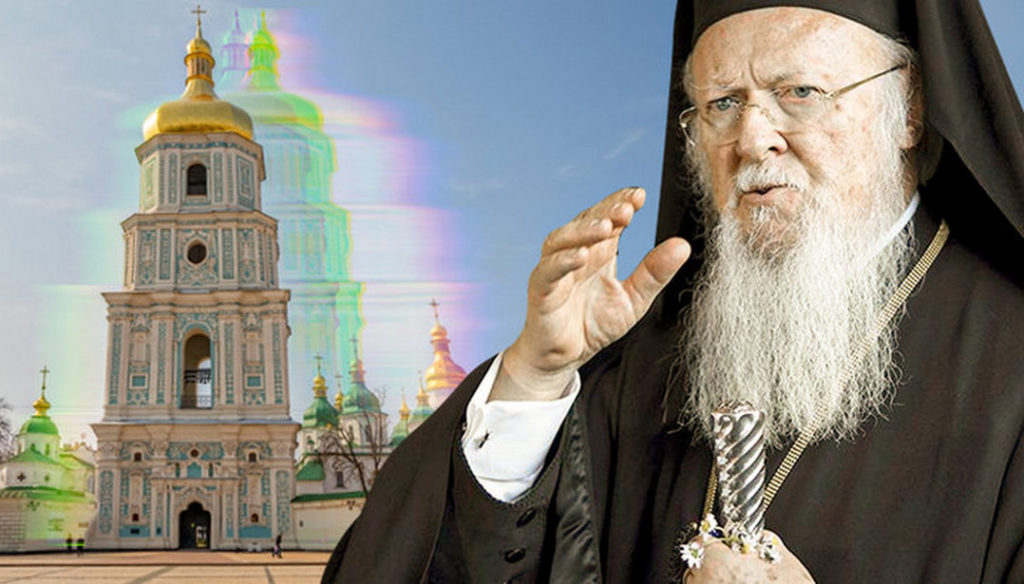 Patriarch Bartholomew does not see any canonical problems in the double and even triple hierarchy in Ukraine. Photo: UOJ

How many canons were violated by the Patriarchate of Constantinople by creating a parallel jurisdiction in Ukraine.

The modern ecclesiastic situation in Ukraine, provoked by the actions of Patriarch Bartholomew of Constantinople, appears as a crucial challenge vis-à-vis the plentitude of World Orthodoxy. One option is to accept the point of view of Constantinople and finally destroy the canonical law system that has developed on the foundation of the apostolic vision of the Church. The other is to remain faithful to Orthodox ecclesiology and reject Phanar’s unilateral actions.

Despite the fact that Constantinople positions itself as a keeper of the apostolic tradition and a guarantor of the inviolability of genuine Orthodox theology, its actions destroy the centuries-old entrenched model of the Church of Christ and the most fateful step in this direction is the creation of parallel hierarchy in Ukraine.

The unity of the Church of Christ being a fundamental principle of ecclesiology was realized through the unity of the episcopate. In one city there is only one bishop: this decree of the I Ecumenical Council, fixed in its 8th canon, was always strictly observed, and the existence of parallel hierarchy was considered a sign of a split.

The single legal canonical bishop was the head of the Eucharistic Assembly for the local Christian community. From the point of view of the Church, he is not just an administrator, preacher or manager, he is a performer of the Sacraments, the one with whose lips the whole community offers God their prayers and via whom God answers these prayers. Consequently, the presence of two primates, two bishops with equal rights in one community, involves two Eucharists, two Bodies and two Chalices, which inevitably leads to the recognition of two Churches and two “Christs”. Such a scenario contradicts the Christian faith, breaks the inner connection and divides the community.

That is why, from the apostolic times until the 21st century, the principle of the unity of the episcopate was always sacred and unshakable in Orthodoxy.

Despite the fact that Constantinople positions itself as a keeper of the apostolic tradition and a guarantor of the inviolability of genuine Orthodox theology, its actions destroy the centuries-old entrenched model of the Church of Christ.

But in 2018, the Patriarchal See of Constantinople, which occupies the first place in the diptych of equal Local Orthodox Churches, undertook an unprecedented move.

The Constantinople See laid the foundation for a parallel hierarchy.

Until 2018, Constantinople, like all Orthodox Churches, recognized the only canonical Church in Ukraine – the UOC, led by Metropolitan Onuphry of Kiev, whose correct and legitimate election was evidenced by the “Peace Letters” of all Orthodox Primates, including the Patriarch of Constantinople.

However, on December 15, 2018, under the leadership of the then President of Ukraine and the legates of Constantinople, the so-called “Unification Council” takes place, which, on the basis of undercover agreements, lies and dirty manipulations, de facto creates a parallel church structure, a parallel hierarchy.

And here, from the point of view of Constantinople, there begins a split personality, canonical schizophrenia: in Ukraine there is already a recognized canonical structure with hierarchs, clergy, monasteries, theological schools and lay people. But as a result of the “Council”, a new structure immediately arises.

This state of affairs is completely contrary to canon law and ecclesiological thought. But this does not bother Constantinople, and its legates legalize the schism, moreover, accepting all schismatics “in bulk” in the existing rank, without examining the canonical aspects of their consecration. To make matters even worse, it “elects” schismatic Epiphany Dumenko to the Kiev See against the existing legal and universally recognized Metropolitan Onuphry of Kiev.

Constantinople has provoked canonical schizophrenia: in Ukraine there is already a recognized canonical structure with hierarchs, clergy, monasteries, theological schools and lay people. But as a result of the “Unification Council”, a new structure immediately arises.

Such an act completely contradicts the 16th canon of the Constantinople Council of 861 year (in the Church of the Holy Apostles), according to which it is impossible to elect and appoint a bishop to the holy see while its current bishop is alive and retains his rank.

At the time of the so-called “Unification Council” and until today, His Beatitude Metropolitan Onuphry of Kiev and All Ukraine has been a legitimate bishop of the capital’s arch-see and the Primate of the Ukrainian Orthodox Church. He was not convicted, deposed, or forbidden in his ministry. His canonical dignity is impeccable and recognized by the plentitude of Orthodoxy. Consequently, according to the canons, it is impossible to elect another Kiev Metropolitan.

However, Phanar goes for it, grossly violating the canons. And even this turns out to be not enough: in the newly created structure there remains a hierarch who still continues to bear the title “Kiev” – “patriarch” Filaret. It means not TWO but THREE bishops who are recognized by Constantinople are located in one city.

And even this is not enough. At one of the first meetings of the “Synod,” the OCU forms another diocese for Kiev parishes – Pereyaslav-Khmelnitsky, giving part of the parishes located in the capital and its environs under the omophorion of the former Metropolitan Alexander (Drabinko).

This is the case not only in Kiev. In almost every city there are several “bishops” of the Ukrainian Orthodox Church bearing similar or even identical titles, the boundaries of whose dioceses overlap, as well as the bishop of the Ukrainian Orthodox Church, whose canonical dignity is not disputed and recognized by the fullness of Orthodoxy. And fanariots, calling themselves guardians of canonical tradition, calmly swallow this flagrant anti-canonical state of affairs.

Analyzing the rationale of such phenomena, it should be remembered that the vast majority of activists of the OCU were spiritually raised in schism, therefore, their ecclesiological consciousness is distorted. For them, the Church from the “Pillar and Affirmation of Truth” (1 Tim. 3:15), the “Bride of the Lamb” (Ephesians 5: 25-27) and the “mystical Body of Christ” (1 Cor 12: 12-27) turns into a human institution, a secular organization. And such organizations, from the point of view of the schismatic hierarchy, can be as many as you want and they can compete among themselves.

Hence we can hear the theologically delirious rhetoric about the “enmity of the Russian Church” and the canonicity of “transitions” from one church organization to another.

The fanariots, calling themselves guardians of canonical tradition, calmly swallow this flagrant anti-canonical state of affairs.

For the first time, such notions were voiced by the notorious former archimandrite Victor Bed, who justified his transition to the UAOC by the fact that he simply changed jurisdiction and was no longer under the jurisdiction of his initial church. For him, this was tantamount to changing his job.

Later, such a heretical model of attitudes towards the Church was taken up by the official structures of the OCU, and its “Synod” expelled some hierarchs from among the bishops without any canonical analysis of their actions and without banning them from priesthood.

Such a view of the Church was called the “Bedesque” ecclesiology and it continues to be burgeoning in the OCU.

As for the throne of Constantinople, in order not to fall on its canonical face, it has to calmly witness the excesses of its offspring, put up with “double” hierarchy, even further driving itself into the corner of the canonical dilemma.

But the way out of this dilemma is very simple – to revoke the so-called “Tomos” and return to the track of the God-established canonical system, which will allow inside Ukrainian Orthodoxy, without the influence of external forces and biased politicians, to find ways to overcome the crisis provoked by the inept and non-canonical actions of Patriarch Bartholomew.