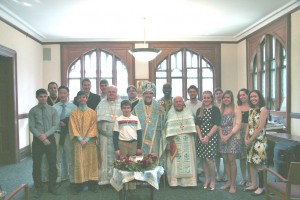 PRINCETON, NJ [OCA] – Sunday, September 15, 2013 marked the observance of the Orthodox Christian Fellowship’s “College Student Sunday” in parishes across the US through special services, programs, and other activities.  [See related article.]

Among them was a celebration, at which His Grace, Bishop Michael of New York presided, at the Chapel of the Transfiguration on the campus of Princeton University.

Bishop Michael celebrated the Divine Liturgy, as he has each year throughout his episcopacy, at the chapel.  Assisting were Archpriest Daniel Skvir, Orthodox Christian Chaplain at Princeton; Archpriest Paul Shafran, a faithful supporter of the Chapel since it’s inception; and Deacon Gregory Hatrak.

At the Liturgy, special prayers were offered for all Orthodox students, for the suffering Christians in the Middle East, for the success of the upcoming Assembly of Bishops, for the health of Protodeacon Michael Sochka (recovering from a recent auto accident), and for the repose of previous celebrants at the Chapel’s altar, including Archpriests John Turkevich, Princeton Orthodox Chaplain for 24 years; Georges Florovsky, who spent the last 12 years of his life at Princeton; and Constantine Buketoff, the first priest to celebrate the Divine Liturgy on the campus.  Prior to the veneration of the Cross, Bishop Michael blessed a new icon of Christ, the work of parishioner/iconographer Lydia Hull.  The liturgical responses were sung by the Chapel choir, comprised of undergraduate and graduate students, faculty, and local Chapel members.

The Princeton OCF, like all OCFs, is a Pan-Orthodox microcosm, with members coming from various jurisdictions working and worshipping together in unity of faith and language.  It also includes students from nearby Rider University and Westminster Choir College.  In 2014, it is anticipated that His Beatitude, Metropolitan Tikhon, will preside at the annual celebration to mark the Chapel’s 50th anniversary.  (Princeton’s OCF is a few years older than that.)  The combined Chapel/OCF counts among its alumni two Metropolitans, one Archbishop, four priests, two deacons and two nuns.  Its alumni also have distinguished themselves in various academic fields, both in their undergraduate years and in their various professional vocations.

“This institution, as it is officially classified within the Diocese, is one of the very few to offer a weekly Divine Liturgy on a University campus throughout the academic year,” said Father Daniel.  “The Liturgy, along with weekly meetings devoted to a wide variety of educational and social activities, provide students with a vital and spiritually important Orthodox home in critical years of growth.”

Orthodox Christian Fellowship is the official campus ministry of the Assembly of Canonical Orthodox Bishops of North and Central America.

[subscribe2]
Share. Twitter Facebook Pinterest LinkedIn Tumblr Email
Previous ArticleAn Orthodox Christian from Syria: “I lived in Romania for 7 years and I tell you honestly that I do not think that the Romanian Christians have more freedom than the Syrian Christians”
Next Article Church shows mercy by upholding truth about marriage, speakers say