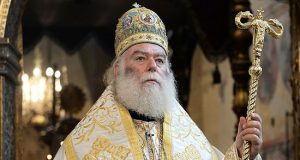 Theodoros II, the Patriarch of Alexandria and All Africa

Alexandria – Theodoros II, the Patriarch of Alexandria and All Africa, appealed to all Local Orthodox Churches to participate in the Pan-Orthodox Council on Crete, reports Sedmitsa.ru, with reference to Romfea.

In an interview given to radio station 98.4, Patriarch Theodoros regarded as an historical Church Council that which is to take place in June 2016 on the island of Crete. The Alexandrian Patriarch stated that “the Orthodox Church should be far from political, national, and racial affiliations.

“It’s impossible to imagine that it would be possible in the last minutes to not come to the Church Council, in line with personal aspirations and dissatisfactions related to primacy in the diptychs and the role of the coordinator, fulfilled by the Patriarch of Constantinople, although the decision was earlier made unanimously!” Patriarch Theodoros said.

The primate of the Alexandrian Orthodox Church believes that the Bulgarian Church will not change its decision, in contrast with the other three Local Churches, which didn’t say “no” in such a categorical fashion.

According to Patriarch Theodoros, the primates of those Churches which are putting forth such worldly issues as the primacy of honor, “should get up from their richly ornate thrones and visit Africa, to understand the meaning of the poor and humble children of Christ.”