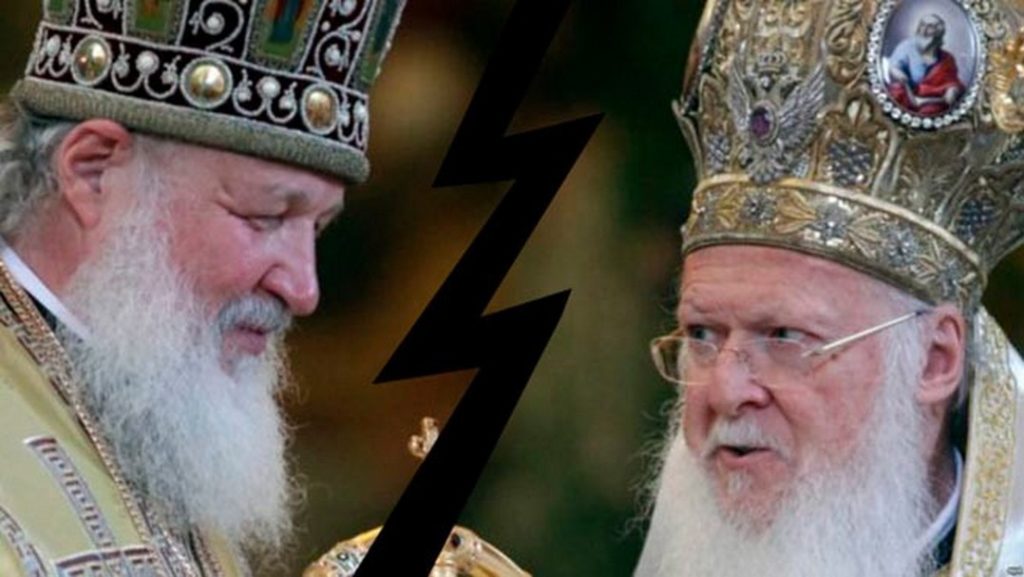 According to Patriarch Bartholomew of Constantinople, there is no schism within the Orthodox Church today. And although he is often accused of neopapism, it is in fact the Patriarch of Moscow who harbors papal pretensions, the primate of Constantinople said in an interview with To Vima published yesterday.

On October 15, 2018, the Holy Synod of the Russian Orthodox Church took the painful but necessary step of breaking Eucharistic communion with the Patriarchate of Constantinople after the latter unilaterally invaded Ukrainian Church territory, received defrocked and anathematized schismatics back into communion without any due process or justifiable reason, and announced its intentions to create a Local Church on Ukrainian Church territory, which it did two months later.

However, Pat. Bartholomew simply closes his eyes to this reality, pretending it does not exist.

“There is no schism in Orthodoxy,” he told To Vimas.

And turning to self-justification, he continued: “I can’t let Orthodox ecclesiology be altered on the altar of lesser interests. I have no right to take a step back. The word of truth is ‘sharper than any knife.’ It is testified by history, the sources, the documents, the facts.”

Recall that Pat. Kirill personally proposed to Pat. Bartholomew that a deep study of the relevant documents surrounding the transfer of the Kiev Metropolis from Constantinople to the Russian Church in 1686 be undertaken, but Pat. Bartholomew refused. Studies of the history and documents can be read here and here.

Countless hierarchs have also proposed that the whole Ukrainian matter be taken up by a pan-Orthodox council, but again, Pat. Bartholomew has continually refused, though it is not clear what he stands to lose if his position is so solid.

Further, the word of truth is “altered by money, intimidation, propaganda and pipe dreams,” the Patriarch continued in his interview.

Just two days ago, U.S. Secretary of State Mike Pompeo acknowledged that the U.S. is involved in pressuring Churches to accept Constantinople’s actions and recognize the schismatic “Orthodox Church of Ukraine.”

Although Constantinople claims for itself the right to act unilaterally within the Church, when asked about the papal tendencies attributed to him, Pat. Bartholomew simply said they do not exist. “Is it papism to shoulder the responsibilities of my ministry?” he asked.

He also argued that the real motivation behind the Russian Church’s stance that anathematized and unordained schismatics cannot be amalgamated into a new Church where a canonical, universally-recognized Church already exists is the desire to “remove these unique responsibilities from the throne of Constantinople and transfer them to other hands.”

However, Pat. Bartholomew cannot deny those responsibilities that he believes he inherited from his predecessors, as he told To Vimas.

And while Synods, primates, and hierarchs from every Local Church have spoken of Constantinople’s lamentable neopapism, Pat. Bartholomew reveals a tragic lack in self-awareness and throws the same accusation at Pat. Kirill. Referring to the Russian primate, he asks: “Who, then, behaves like the ‘Pope of Orthodoxy?’ The one who remains faithful to its tradition or the one who claims for himself a position that he never had and is never going to acquire?”

In a recent interview, His Eminence Metropolitan Hilarion (Alfeyev) of Volokolamsk, the head of the Moscow Patriarchate’s Department for External Church Relations, clearly explained that the Russian Church has no desire to hold the title of primacy in the Orthodox Church.

In fact, the Russian Church is the only Local Church that officially recognizes on a Synodal level the primacy of the Patriarch of Constantinople within the Orthodox Church.