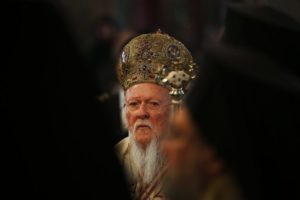 BOSTON – His All Holiness the Ecumenical Patriarch Bartholomew was taken to the American Hospital in Constantinople on Sunday afternoon of May 6th, after he felt intense dizziness, possibly vertigo.

He remained in the hospital overnight as a precaution and after the appropriate examinations he was released on Monday, May 7 and is now at home.

Bartholomew I (born on February 29, 1940) is the 270th and current Archbishop of Constantinople and Ecumenical Patriarch, since 2 November 1991. He is widely regarded as the primus inter pares (first among equals) in the Eastern Orthodox Church, and as the spiritual leader of 300 million Orthodox Christians worldwide.

Born Dimitrios Arhondonis (Greek: Δημήτριος Αρχοντώνης), in the village of Agios Theodoros on the island of Imbros, after his graduation he held a position at the Patriarchal Theological Seminary of Halki, where he was ordained a priest. Later, he served as Metropolitan of Philadelphia and Chalcedon and he became a member of the Holy Synod as well as other committees, prior to his enthronement as Ecumenical Patriarch.