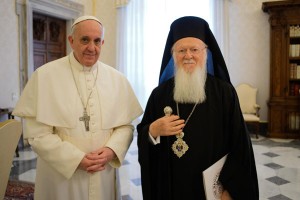 Ecumenical Patriarch Bartholomew I in an interview with the Italian agency SIR said that today there are many issues that both churches must address together, Religion in Ukraine reports, with a reference to Pomisna.

“Today, perhaps more than 50 years ago, there is an urgent need for reconciliation. This means the meeting with our brother Francis Pope in Jerusalem is very important,” said Patriarch Bartholomew about the upcoming pope’s visit to the Holy Land.

Among the issues that the Orthodox and Catholic Churches are facing, he described the suffering and injustice experienced by people around the world, the abuse of religion for political purposes, increasing difficulties faced by believers in Christ, and the environmental crisis. All of this, according to Bartholomew, requires taking decisive steps in mutual rapprochement and reconciliation of various Christian denominations, as well as joint actions aimed at overcoming the challenges of our times. The patriarch believes Pope Francis has an important role in this respect.

“He is the head of the church, who is known for his sincerity and altruism, on whose heart lie of the problems of the division of the church and the suffering of our world,” said Patriarch Bartholomew.

Speaking about Orthodox-Catholic relations in the last half century, the ecumenical patriarch said that they were not easy, but, he said, it is clear that the spirit of brotherhood and respect began to dominate over the old polemical issues as well as over judgment and suspicion.

“There is much to be done and the road seems long. But we need to stay on it, despite the difficulties, because there is no alternative,” said Patriarch Bartholomew.