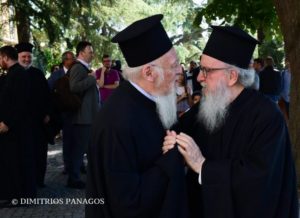 FILE – Archbishop Demetrios with Patriarch Bartholomew in a previous meeting at the Theological School of Halki. (Photo by GOA/Dimitrios Panagos)

BOSTON– His All Holiness Ecumenical Patriarch Bartholomew appears to be undecided once again about the issue of His Eminence Archbishop Demetrios of America and the possibility of replacing him with a new Archbishop. The National Herald has learned that the Patriarch made a brief mention of the issue at the Holy Synod of the Patriarchate which convenes this week at the Phanar.

He reportedly said that he is being pressured concerning the ecclesiastical problem of America and the removal of Archbishop Demetrios, but the issue will be resolved at its proper time. The Patriarch did not clarify when the proper time will be.

High ranking ecclesiastical officials of the Ecumenical Patriarchate and close associates of the Ecumenical Patriarch told TNH that from what they understand the Patriarch has arrived at his own conclusions for America which he will make known at some time in the future, while the element of surprise should not be ruled out.
In the meantime, many were expecting that Patriarch Bartholomew this time would resolve the serious and overdue issue of Archbishop Demetrios. It is noted here that Patriarch Bartholomew in recent months had twice requested from Archbishop Demetrios to willingly submit his resignation due to both the spiritual and financial bankruptcy the Archdiocese is in, but the Archbishop refused, showing total defiance to his Ecclesiastical Authority.

The Synod of the Ecumenical Patriarchate is dealing with the serious issue of granting Autocephaly to the Orthodox Church of Ukraine. The completion of the Tomos could be as early as Thursday, October 11, but first the issue of canonicity of the Ukrainian hierarchs should be resolved.