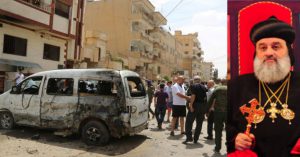 People and security forces belonging to the Sotoro, a Christian militia based in Syria’s northeast, gather at the site of a suicide bomb attack carried out on Sunday in the divided Syrian city of Qamishli. A file photo of Patriarch Ignatius Aphrem II is seen on the right. AFP/Onmanorama

Qamishli, Syria: Patriarch Ignatius Aphrem II, head of the Syrian Orthodox church, had a close shave on Sunday when a suicide bomber detonated himself at a commemoration attended by him. Three people were killed in northeast Syria when the bomber attacked an event commemorating the massacre of Christians more than a century ago, state media and a security source said.

Patriarch Ignatius Aphrem II was leading the commemoration and security sources said he was the target of the bomber. He escaped without any injuries.

Patriarch Ignatius Aphrem II is the supreme leader of Syrian churches including the Jacobite church in Kerala.

The attack in the city of Qamishli took place as locals gathered at a hall to commemorate the deaths of tens of thousands of Christians by the Ottoman army starting in 1915 in what is known as the Sayfo (‘Sword’) massacre.

A photographer working with AFP and attending the event said he heard the blast and saw pieces of flesh lying next to damaged cars.

“The suicide attacker tried to enter the hall where people were gathered but was stopped by local security forces, and he detonated himself among them,” a security source at the scene told AFP.

The security forces belonged to the Sotoro, a Christian militia based in Syria’s northeast.

One Sotoro member told AFP that the suicide bomber ‘detonated himself near our checkpoint after he couldn’t reach his real target, Patriarch Ignatius’.

Syria’s state news agency SANA also reported three people killed in a ‘terrorist suicide explosion’ in Qamishli but did not specify whether they were civilians or security forces.

Situated along the border with Turkey, Qamishli has been regularly targeted by suicide bombings, many of which have been claimed by the ISIS group.

Control of the Kurdish-majority city is split between Kurdish militia and pro-government fighters.

Syrian Christians belong to the eastern Christian tradition and pray in Aramaic. They include both Orthodox and Catholic branches, and constitute around 15 per cent of Syria’s 1.2 million Christians.