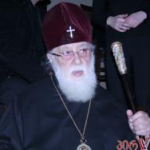 (Originally published October 24, 2011) Catholicos Patriarch of Georgia Ilia the Second spoke about his visit to Konstantinopolis in his church service yesterday. He said he was there on the 20th jubilee of enthronization of world Patriarch, Bartlomeos I.

“We spoke about future orthodox meeting. Bartlomeos I wants a meeting of orthodox churches to take place. We responded to him saying that such a meeting cannot be held until all disputed issues are solved”, Ilia the Second specifically said.

“We told him that the temple must belong to the mother church of the country if the congregation wishes, and if the congregation want this temple to belong to the world Patriarch, then mother church will not be against this”, Ilia the Second said, adding that a lot of issues are to be solved and it’s very dangerous to summon an orthodox meeting. He voiced hope that all the issues will be solved, but he also said it would take time.