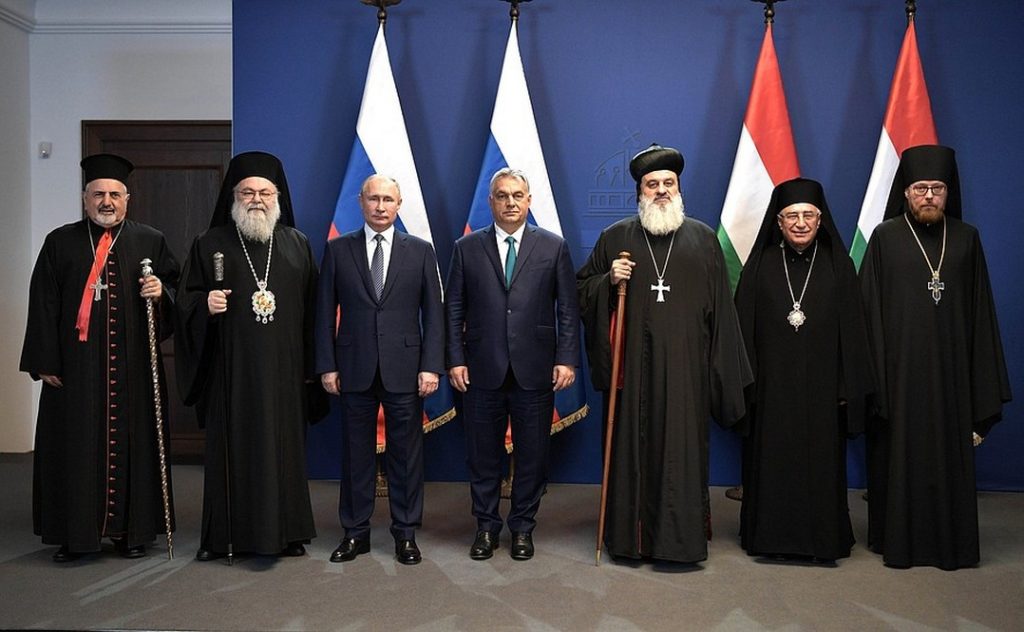 BUDAPEST – Patriarch John X of Antioch and the heads of several other Christian churches in the Middle East met with Russian President Vladimir Putin and Hungarian Prime Minister Viktor Orband in Budapest on Wednesday, October 30 to discuss the ongoing persecution and ways to protect the suffering Christian communities in the Middle East.

The meeting, which was organized by Prime Minster Orban, was also attended by Patriarch Mar Ignatius Ephraim II of the Syriac church, Melkite Patriarch Youssef I AbsI of Antioch and All the East, Alexandria and Jerusalem, and Syro-Catholic Patriarch of Antioch and all the East Ignatius Youssef III Yunan.

As Prime Minister Orban noted at the end of the conversation, in order to understand the situation faced by Christian communities in the Middle East, the best way was “to ask those who live there, to ask the heads of churches who are in this region.”

“We met in person, and now we can discuss what politicians can do to make your life easier in this region. Therefore, many thanks for accepting our invitation,” the Hungarian Prime Minister said, addressing the guests from the Middle East.

Hungary has proven itself a great ally of persecuted Christians in recent years. For example, in September 2016, it became the first government to open an office specifically to address the persecution of Christians in the Middle East and Europe; in July 2017, it allocated nearly $2 million to help restore churches in Lebanon.

Thanking the head of the Hungarian Government for organizing the meeting, Pres. Putin stressed that Russia is making persistent and consistent efforts to help bring peace and stability to the Middle East; in particular, much has been done to combat terrorism in the Middle East in general and on Syrian soil in particular, he said.

He also noted the importance of the assessment of the situation in the Middle East by the heads of Christian churches in the region. “Despite the fact that we know what is happening in general, and in general we understand the needs you face, it is still important to hear your own opinion on the assessment of the situation and what we could do to help and support you further,” Putin said.

The Russian President also conveyed the good wishes of His Holiness Patriarch Kirill of Moscow and all Russia to the participants of the meeting, saying: “I had the pleasure of talking with him today. He knows about our meeting and asked me to greet you all on behalf of the Russian Orthodox Church and to wish you all the best.”

Hungary’s State Secretary for the aid of persecuted Christians, Tristan Azbej told Vatican News that Hungary wants to set up an international alliance to help Christian believers and other faith minorities during an upcoming conference next month.

“We have an aim of collecting and mobilizing governments on one platform. That would coordinate its efforts to help the persecuted Christians of the Middle East, Africa, and also other minorities who are persecuted for their religion and belief,” he explained.