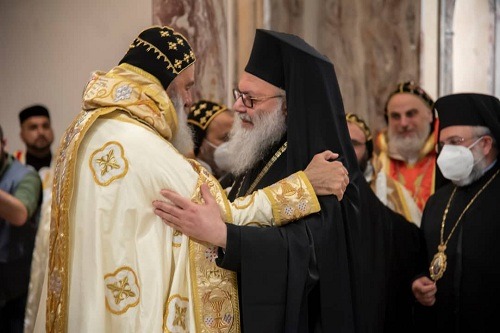 According to a report published by the official portal of the Syriac Orthodox Church Patriarch John X in his speech stated that “I assure Your Holiness that your celebration is ours. When I heard the Homologia, except for the part about the ecumenical councils, I felt as if I am declaring my faith as a Greek Orthodox.” “Allow me, Your Holiness, to consider with you this day as a decision to relaunch the Joint Committee between our two Churches to continue its serious work and to increase its efforts to remove all remaining obstacles in face of our unity.” Together, we may give common witness for our one Orthodox Faith to our Christian communities but also to the whole world.”

After the consecration ceremony, Patriarch John presented the newly ordained Archbishops with Staffs and gifts.