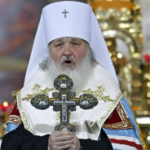 Beirut, November 15, Interfax – Patriarch Kirill of Moscow and All Russia and Lebanese President Michel Suleyman discussed at a meeting in Beirut the current complicated situation in the Middle East and they agreed that peaceful changes must be carried out and new manifestations of Christianophobia prevented.

“We are extremely concerned about the position of Christian communities in Egypt, Iraq and Libya. We have been witnessing radical growth in Christianophobia in other countries, as well,” the Patriarch said.

The Russian Orthodox Church cannot remain indifferent to the fate of the Antiochian Church, whose jurisdiction extends to Syria and Lebanon. “We are one with it,” he said.

Changes are much needed, but they must run peacefully, on the basis of an internal public dialogue, without external interference and with due respect given to the interests of the minorities, to which Christians belong in the Middle East, he said.

“I am praying for peaceful changes in Syria, Egypt and other countries in the Middle East and North Africa. I pray to God that the change in the life of the Arab countries will not entail catastrophic events,” Patriarch Kirill said.

Suleyman said violence would hopefully be stopped in the Arab countries and democratic reforms carried out with due account taken of the interests of all groups of citizens.

The Lebanese president also thanked the Patriarch for the high appraisal of the Lebanese social system, where representatives of all religious communities are actively involved in the life of the country. By tradition, the president is elected from among the Maronites in Lebanon, which is a Christian minority.

“Amid growing extremism in the world, it becomes clear that this system can guarantee citizens a happy life,” Suleyman said.

The Patriarch invited Lebanese Church notables who attended the meeting to join a discussion on the future set-up of the world civilization. The Maronite Patriarch, Beshara al-Rai, said preparations are underway for a summit of Christian and Muslim religious leaders of the Middle East.