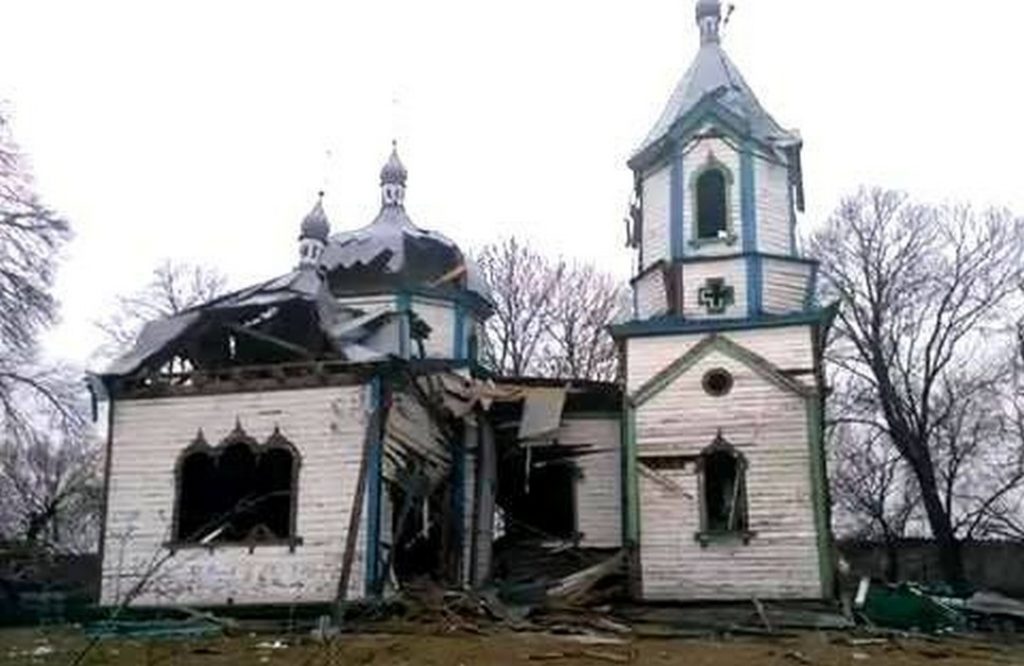 Church of the Nativity of the Virgin (UOC-MP), built in 1862. Village of Vyazívka Naroditsky district of Zhytomyr region. Damaged by the Russian shelling.

Suggestively linking a Russian Orthodox primate, an ideology, and genocide may seem provocative or sensationalist. For me, given the current unjustified Russian war on Ukraine, the connections between them are far from that. In this moment in our common history as a human family, ‘naming” a reality is utterly important here for assessing the horrific events in Ukraine and the ideology that is complicit in such violence against the very innocence that characterizes the people of Ukraine. Naming is a profoundly ethical choice.

Genocide is not an abstract concept in this present moment for the people of Ukraine, its diaspora, and all people of good will. Genocide is the eradication of racial, national, ethnic, or religious groups. Although there are scholarly debates on this concept, I’ve chosen to approach it within an ethical conceptualization and from a victim-centered viewpoint. Genocide is a term first coined by Raphaël Lemkin during WWII, which he defined as the elimination of differences among “colonized groups” in order to impose the cultural and political identity of a “colonizing group.” Those who hold different identities from the dominant power group are either suppressed, exiled, or killed. Genocide destroys existing bonds of social or civic solidarity of groups and the potential for their self-determination. Further, Lemkin identifies genocide within a much broader framework, since he does not restrict genocide to any one act, like killing or forced famine, since genocide is constituted by various cumulative acts toward the destruction of an identifiable group of people.

In our current context, the quasi-religious ideology complicit in genocide is the “Russian world” (Russkii mir) myth.

The “Russian world” civilizational mythology holds that there exists a grand Russian civilization based on a “spiritual unity” between Belarussians, Ukrainians, and Russians, all holding the same Orthodox faith and language (i.e., the Russian). That “Russian world” is a society of “traditional values” and is cast in opposition to a perceived decadent West. It is a romanticized ideology of historical grievances and collective scapegoating. It is also an ideology based on historical revisionism since the complex and distinct histories of Ukraine, Belarus, and Russia are glossed over in order to construct a mythical historical narrative of the rise of the “Russian world” from ancient Kyivan Rus’ through the “holy city” of Kyiv, all bequeathed today to the Russian Orthodox Church and the “Russian” peoples. Critics of this national origin myth have described it as a modern form of Orthodox fascism or Orthodox fundamentalism. The recent major international declaration of leading Orthodox theologians has condemned the Russian world myth as a “false teaching of ethno-phyletism,” and thus as a heresy which is “profoundly un-Orthodox, un-Christian and against humanity.” Such Russian supremacism is patently racist.

At the onset, let me also unambiguously state that I am convinced that there are countless genuine believers—clergy and laity—in the Russian Orthodox Church who are today experiencing state oppression. Yet, some of its hierarchs, like Patriarch Kirill of Moscow and Metropolitan Hilarion of Volokolamsk, have been at the forefront of promoting a “Russian world” ideology which seeks to destroy the distinctiveness of Ukraine in general, but also Ukrainian Christianity, in particular. This Russian Orthodox leadership is widely recognized as being a tool of Russian soft-power since it fosters close church-state relations. At a minimum, we should ask the ethical question if the promotion of the “Russian world” myth by the leadership of the Russian Orthodox Church is a sin of omission, of knowing what is morally right but failing to act on that knowledge. In the current Russian war, that would mean both consciously ignoring the knowledge that such an ideology incited collective acts of violence against the Ukrainian people and in failing to condemn war. However, more fundamentally, we should ask the ethical question of whether the “Russian world” myth is complicit in promoting genocide. In the first place, such a mistruth deliberately establishes a dominant colonial class of an imagined unified “Russian” peoples, while “othering” those who do not belong, namely, the Ukrainian peoples, all of whom who should be assimilated into the “Russian world.” It demonizes and dehumanizes Ukrainians by casting them as being an “artificial” state while collectively scapegoating them as so-called “nazis” and “fascists.” Any Ukrainian Orthodox and Eastern Catholics who do not belong to this ‘Russian world’ lineage are vilified and marginalized in global Christianity. Despite all the talk of a ‘spiritual unity’ of Russians and Ukrainians, which should be a positive thing among any Christian Churches, the phrase has become a “dog-whistle” for the ‘Russian world’ myth. This “dog-whistle” functions as a seemingly innocuous statement when heard by outsiders. However, for insiders it is coded language loaded with a specific meaning. The “spiritual unity” voiced by the leadership of the Russian Orthodox Church—the insiders—becomes a dog-whistle for positing a homogeneous and colonial Russian Orthodox empire, with its bigotry and violence. Applying Lemkin’s categories of genocide, the “Russian world” mythology seeks to destroy the civic solidarity or identity of those Ukrainian Orthodox not under Moscow specifically, but all Ukrainians in general, thereby impeding their self-determination and human flourishing.

Such an ideology is well-known via the Russian President Vladimir Putin, who dubiously called the Ukrainian state an “artificial” creation. This ideology was displayed in his ahistorical pedantic essay of 2021 on the ‘unity’ of the Russian and Ukrainian peoples, and most recently had its most concrete and violent manifestation in economic blockades, cyber-warfare, intimidation and the war in Ukraine. His justification for moving into Ukrainian territories was a collective scapegoating to “de-nazify” the Ukrainian government (Ukraine’s president is Jewish!). And here “de-nazify” is another ‘dog-whistle’ aimed at the liquidation of those opposed to Russian imperialism. Putin’s corruption and egoism employ the “Russian world” mythology to serve his perverse geopolitical purposes.

Even so, Patriarch Kirill continues to uphold the “Russian world” mythology in his statements about the war in Ukraine. On February 23, 2022, hours before the Russian re-invasion of Ukraine, and in the context of a months-long, massive Russian military build-up on Ukraine’s borders, Kirill conveyed legitimate pastoral concerns about peace and for those suffering. Yet, in his speech he nowhere mentioned the Russian war in Eastern Ukraine, on-going since 2014, but made vague references to “events,” “conflicts,” and “disaster.” Granted, the Russian state would deem as illegal any explicit reference to “war” in Ukraine. Nevertheless, in that speech he repeated the colonial ideology—the dog-whistle—of the “unity” of the “Russian world.” Even after three days of wide-spread war upon Ukraine, Kirill again made no condemnation of the war. In calling for peace and unity of the Church, he expressed concern solely for one particular segment of the Ukrainian peoples, the Ukrainian Orthodox subservient to Moscow. He repeated the dog-whistle of the unity of brotherly peoples: “God forbid that the present political situation in fraternal Ukraine so close to us should be aimed at making the evil forces that have always strived against the unity of Rus’ and the Russian Church, gain the upper hand. God forbid that a terrible line stained with the blood of our brothers should be drawn between Russia and Ukraine.” Kirill’s sermon for the Sunday of Orthodoxy repeated the Russian world myth with tropes demonizing those in Ukraine as being akin to heretical “iconoclasts.”  Although this ideology may seem incredulous, it has been trumpeted for decades, reaching a particular ferocity with the granting of autocephaly to the Orthodox Church of Ukraine in 2018.

In stark contrast, Metropolitan Epiphaniy (Orthodox Church of Ukraine) and Major Archbishop Sviatoslav (Ukrainian Greco-Catholic Church) broadcast daily messages of hope and love from the besieged capital city of Kyiv, unambiguously condemning the Russian war and calling for peace. Even Met. Onufriy, of the Ukrainian Orthodox Church (of the Moscow Patriarchate), condemned the war and called upon Patriarch Kirill’s intercession for help. The failures of Russian Orthodox leaders in being prophetic voices condemning the war has led some Ukrainian Orthodox eparchies (of the Moscow Patriarchate) to cease liturgically commemorating the Patriarch of Moscow.

Returning to my original linkages between Kirill, the “Russian world” and genocide, should we see this as a sin of omission in failing to recognize that the “Russian world” mythology results in structural and cultural violence against Ukraine? That would be a very charitable interpretation. I would, however, be more emphatic in naming the profound failure in moral authority and Christian witness. The “Russian world” mythology promoted by Russian Orthodox leaders make them complicit in genocide since this racist ideology denies a distinct civic identity to the Ukrainian peoples, and its churches, and impedes their self-determination as a free and democratic society. Such an ideology, simultaneously coopted by the Russian state, is being used to justify its abhorrent war geared toward imposing what would likely be an oppressive genocidal colonial rule. We should condemn this ideology of violence and hate. We should instead hear all those prophetic voices from Ukraine—and all voices worldwide!—that seek political and religious freedom, and that promote human flourishing and Christ’s command to love of another. Those people are the ones for whom I especially pray today—so, I #StandWithUkraine.

Prof. Jaroslav Skira, is an associate professor of historical theology at Regis College; a Fellow of the Met. Andrey Sheptytsky Institute of Eastern Christian Studies (Univ. of St. Michael’s College); and a member of the coordinating committee for the Petro Jacyk Program for the Study of Ukraine (Munk Centre), all in the University of Toronto.