[ditty_news_ticker id="27897"] PATRIARCH KIRILL: THERE WAS NO QUESTION OF ANY UNION OF THE ORTHODOX CHURCH WITH THE NON-ORTHODOX - Orthodox Christian Laity 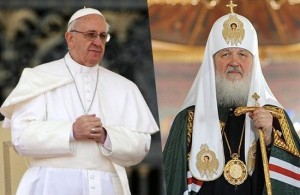 The forthcoming Pan-Orthodox Council is to consider a draft document on Relations of the Orthodox Church with the Rest of the Christian World adopted by the 5th Pan-Orthodox Pre-Council Conference on October 10-17, 2015, in Chambesy. His Holiness Patriarch Kirill of Moscow and All Russia reported this to the Bishops’ Council of the Russian Orthodox Church, which has opened in Moscow.

In his report about the preparation of the Pan-Orthodox Council, the Primate of the Russian Orthodox Church noted that this document was drafted on the basis of two texts elaborated as far back as the 80s, with one of them devoted to the so-called ecumenical movement and the other mostly to the bilateral dialogues conducted by the Orthodox Church with non-Orthodox communities. ‘The need for a considerable revision was dictated by the changes which have happened in a number of Protestant denominations in the last decades’, His Holiness stated, ‘influenced by the secular ideology, many of them embarked on the path of revision of not only their own doctrine but also the very foundations of Christian morality’.

This is what compelled the Orthodox Church to reconsider her relations with such communities, His Holiness reminded the bishops.

‘Our criticism was taken into account in the revision of this document’, Patriarch Kirill stressed noting that in its basic affirmations it takes into account the principle provisions of the Basic Principles of the Russian Orthodox Church’s Attitude to Non-Orthodoxy adopted by the Jubilee Bishops’ Council in 2000. Thus, the draft document of the Pan-Orthodox Council clearly states that the relations of the Orthodox Church with non-Orthodox churches ‘should be built on the speediest possible and more correct clarification of all the ecclesiological topics, especially in the area of teaching on the sacraments, grace, priesthood and apostolic succession as a whole’. In a separate note it states that the Orthodox Church, while participating in the work of the World Council of Churches, “does not accept the idea of ‘equality of confessions’ and cannot perceive the unity of the Church as some inter-confessional compromise”.

‘Certainly, no union of the Orthodox Church with the non-Orthodox is even mentioned in the document’, Patriarch Kirill stated.

Information Service of the Bishops’ Council