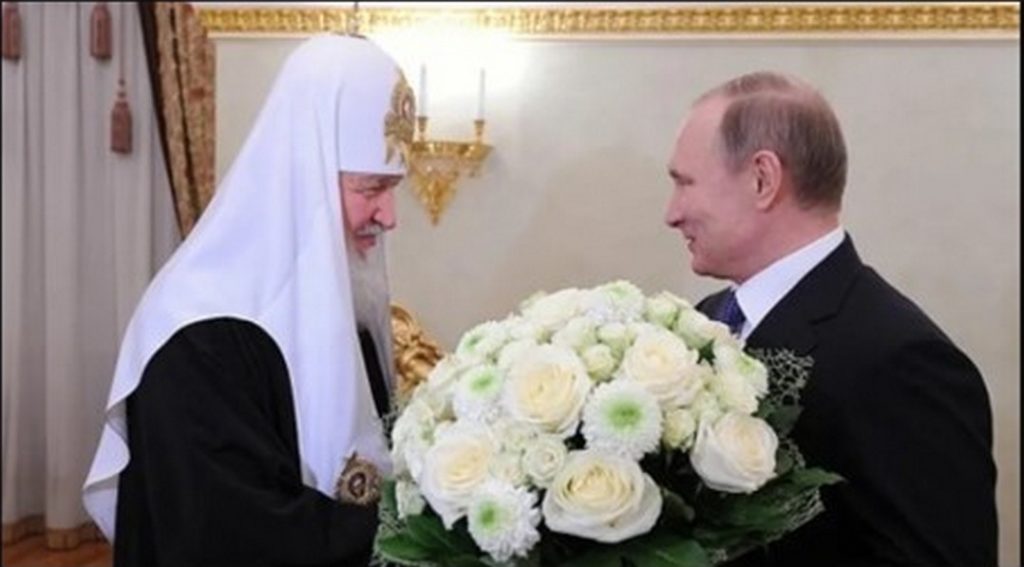 Patriarch Kirill’s “theology of war” which seeks to justify acts of genocide in Ukraine is leading to the collapse of the Russian Orthodox Church of the Moscow Patriarchate as it has existed since Stalin restored that structure during World War II, Sergey Chapnin says.

Indeed, the former deputy editor of the Moscow Patriarchate’s publishing house who has broken with the ROC MP and now is a senior fellow at Fordham University’s Orthodox Christian Studies Center says, what is going on “most clearly resembles” an act of suicide by the Moscow church (theins.ru/opinions/sergei-chapnin/258086).

Many Russian believers, horrified by what Kirill is promoting, have left the church; others perhaps equally horrified remain passively because they see nowhere to go, Chapnin says; but the most interesting are those who seeking to “distinguish between the Church that has servilely bowed down to state power and the Church that seeks to promote evangelical truth.”

They form what might be called “the second Church,” the specialist on Russian Orthodoxy says. “It is neither seen nor heard” and may not yet be large. He says that those with whom he has spoken say that “no more tan 20 percent of parishioners oppose the war,” that only a few Orthodox religious have spoken out against it, and that not one bishop has done so.

It might appear that the church has lined up behind Kirill, but “it is possible that we should speak of silence as a variant of resistance. It turns out that there are two kinds of silence:” the silence of consent and the silence of protest. And under Russian conditions, the second may be far more important than many imagine.

“For decades, priests and bishops of the Russian Orthodox Church have been preaching about the exploits of the new martyrs whom the Soviet authorities repressed … by all available means,” Chapnin continues. But “the ROC only superficially honors the memory of those who, inspired by the Gospel, resisted totalitarian rule.

A decade ago, officials of the ROC MP decided to take precautions lest any future repression of the church by the state lead to the rise of “new martyrs.” In a document written by Vladimir Legoida, now head of the Synod’s media arm, the Church declared that “the heroic deeds of the new martyrs testify to their opposition to theomachy not to the state as such” (patriarchia.ru/db/text/1400907.html).

That has been taken to mean that “no matter what happens, the state cannot be blamed,” Chapnin suggests, “an insidious distortion of the Gospels” but the foundation on which the views of the ROC MP now are based. The question is whether this constitutes heresy, a question that is sparking controversry.

Even Kirill’s harshest critics have shied away from doing so, most recently in the case of the Ecumenical Patriarch who denounced the Russian church for the sin of ethno-tribalism but avoided the term heresy (fosfanariou.gr/index.php/2022/12/11/omilia-ecum-patr-se-abu-dhabi-english-and-greek/; cf. publicorthodoxy.org/ru/2022/03/13/10845/).

According to Chapnin, Orthodox believers and leaders outside of Russia must take the next step because “the Russian Orthodox Church has replaced the Gospels with a mixture of conspiracy, paganism and imperialism, multiplied by deep Soviet complexes fostering the search for external and internal enemies.”

Russia’s “Second Church,” he concludes, is unlikely to publicly oppose the official church and condemn Kirill and his ilk, but there is a chance that the Orthodox world abroad will do so and that will represent “an important and necessary step toward the revival of the Russian Orthodox Church” as a truly religious institution.

Paul Goble is a longtime specialist on ethnic and religious questions in Eurasia. Most recently, he was director of research and publications at the Azerbaijan Diplomatic Academy. Earlier, he served as vice dean for the social sciences and humanities at Audentes University in Tallinn and a senior research associate at the EuroCollege of the University of Tartu in Estonia. He has served in various capacities in the U.S. State Department, the Central Intelligence Agency and the International Broadcasting Bureau as well as at the Voice of America and Radio Free Europe/Radio Liberty and at the Carnegie Endowment for International Peace. Mr. Goble maintains the Window on Eurasia blog and can be contacted directly at [email protected].