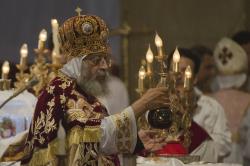 His Holiness Pope Tawadros II, Pope of Alexandria and Patriarch of the See of St. Mark, head of the Coptic Orthodox Church of Egypt

Vatican City, 8 May 2013 (VIS) – From 9 to 13 May, His Holiness Pope Tawadros II, Pope of Alexandria and Patriarch of the See of St. Mark, head of the Coptic Orthodox Church of Egypt, will come to Rome to meet with His Holiness Pope Francis.

The Coptic Orthodox Church of Egypt has about ten million faithful. This large membership makes the Coptic Church one of the most important elements in the ecclesial landscape of the Middle East where, in recent times, Christian communities are having to deal with very difficult situations.

Pope Tawadros’ predecessor, Pope Shenouda III, met with Pope Paul VI in the Vatican 40 years ago in May of 1973. On that occasion, the Pope and the Coptic Orthodox Patriarch signed an important Christological Declaration in common and initiated bilateral ecumenical dialogue between the two Churches.

Since the election of Pope Tawadros II as the new Coptic Orthodox Patriarch, there has been a growing rapprochement between the Christian communities in Egypt. This has led to the establishment of a council of Christian Churches in Egypt.

Pope Tawadros, as well as having an audience and a shared prayer with the Holy Father on Friday, 10 May, will be received at the Pontifical Council for Promoting Christian Unity and other dicasteries of the Roman Curia. He will visit the tombs of the Apostles Peter and Paul and will meet with the faithful of the Coptic community resident in Rome.