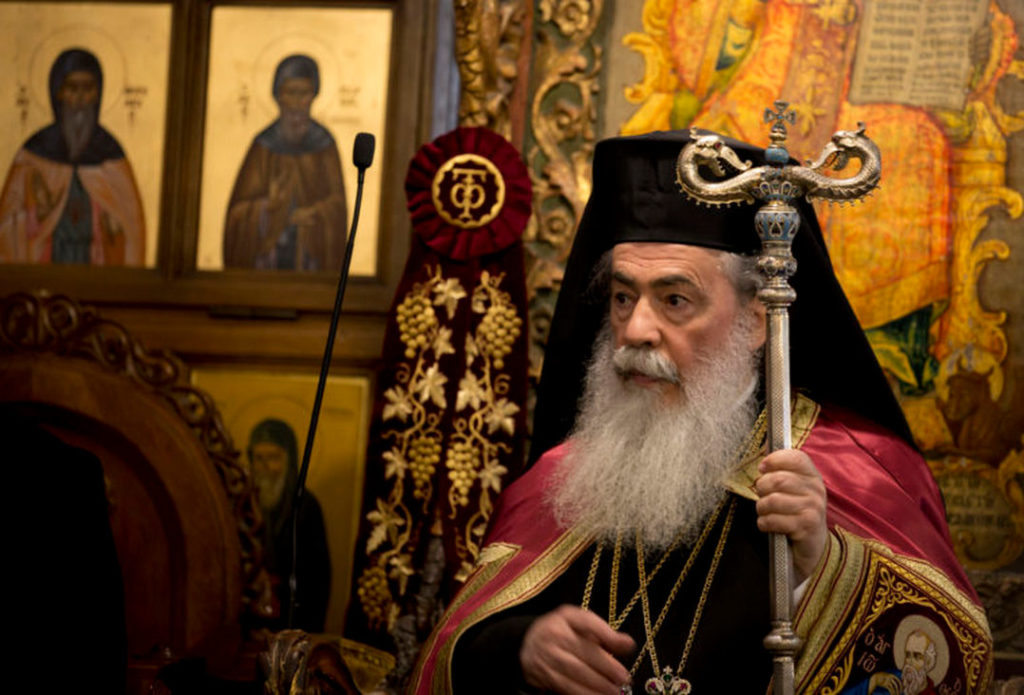 Greek Orthodox Patriarch of Jerusalem Theophilos III arrives to the Church of the Nativity, built atop the site where Christians believe Jesus Christ was born, to celebrate Christmas according to the Eastern Orthodox calendar, in the West Bank City of Bethlehem, Monday, Jan. 6, 2020. (AP Photo/Majdi Mohammed)

JERUSALEM – On January 23, His Beatitude Theophilos III, Patriarch of Jerusalem, expressed his joy as he welcomed the progress towards the release of Naama Issachar, following a meeting today between His Beatitude, Russian President Vladimir Putin, and Prime Minister Benjamin Netanyahu. His Beatitude had previously met with President Putin in November 2019, raising the case of Ms. Issachar and passing a letter on from her mother Yaffa Issachar. His Beatitude, speaking on hearing the news:

“It is with great joy that we heard the assurances from His Excellency President Putin that everything will be alright for Naama Issachar. We pray that Naama Issachar will soon be reunited with her family and will once again walk free in Israel. His Excellency President Putin is showing compassion and wisdom through this intervention. We offer our thanks to His Excellency, as we continue to pray for him and his leadership, and for all the people of Russia. We hope these developments will lead to greater friendship and cooperation between nations and inspire a unity of spirit between the followers of the Abrahamic faiths around the globe. There is no doubt that for Ms. Issachar’s family and friends these words will mean so very much.”

His Beatitude met with Putin during His Beatitude’s visit to Moscow where he received an award for his work on church unity. This work for unity extends between the churches of Jerusalem, within the Orthodox Faith, and the global Christian community, many of whom are welcomed in the Holy Land as pilgrims each year.

The statement related to Naama Issachar comes as world leaders gather in Israel to remember the Holocaust and 75 years since the liberation of Auschwitz-Birkenau. In a statement released on the Patriarchate website, His Beatitude drew these events together to highlight the significance of his mission for Christian unity and action:

“We mourn for those who suffered and died so terribly in Auschwitz-Birkenau, and throughout the Holocaust. We pray for comfort for all of those with family members no longer here because of these atrocities. All people must heed the lessons of history and never fail to stand alongside our neighbors of different cultures, ethnicity, and faith, to ensure their freedom and safety.”

“Our Lord Jesus Christ declared that God’s great blessings come to those who are peacemakers, those who show mercy, those who mourn, and those who are persecuted because of him. For those that share our faith whether they are leaders or the most humble congregant, each must make every effort according to their means in these holy tasks and will receive blessings accordingly. The merciful will be shown mercy. The peacemakers will be called the children of God. Today as leaders of many faiths and cultures stand in sorrow and reflection for past evil we pray for a new wellspring of hope; for peace, for mutual understanding, for selflessness, and for mercy. Amen.”

His Beatitude extended his greetings and good wishes to the Issachar family, sharing in their hope for speedy resolution.

Naama Issachar, an Israel-American aged 26, was arrested last year while on a layover in Moscow as she returned from India back to Israel. Issachar was convicted and was serving a seven and a half year sentence for possession of 9.5g of marijuana.

On November 21, 2019, His Holiness Patriarch Kirill of Moscow and All Russia presented His Beatitude Patriarch Theophilos III with the Patriarch Alexy II Prize of the International Public Foundation “For Outstanding Work for Strengthening the Unity of Orthodox Nations and for Asserting and Promoting Christian Values in the Life of Society.”

On the November visit to Moscow, His Beatitude also met with His Excellency President Putin and appealed on behalf of Ms. Issachar, passing on a letter from Ms. Issachar’s mother, Yaffa Issachar. His Beatitude had met with the Issachar family to discuss their situation.

His Beatitude Theophilos III has served as the Patriarch of Jerusalem since 2005. Born in Greece, he attended school in Jerusalem, where he later became a monk and began his service to the church. After further studies at Durham University, Theophilos served in the Holy Land, Qatar, and Russia. The See of Jerusalem was founded by James the brother of Jesus, and Patriarch Theophilos is acknowledged by the Israeli, Palestinian and Jordanian authorities, as well as by the Churches of Jerusalem, as the senior Christian leader in the Holy Land.

The full statement from His Beatitude for the World Holocaust Forum is available online.