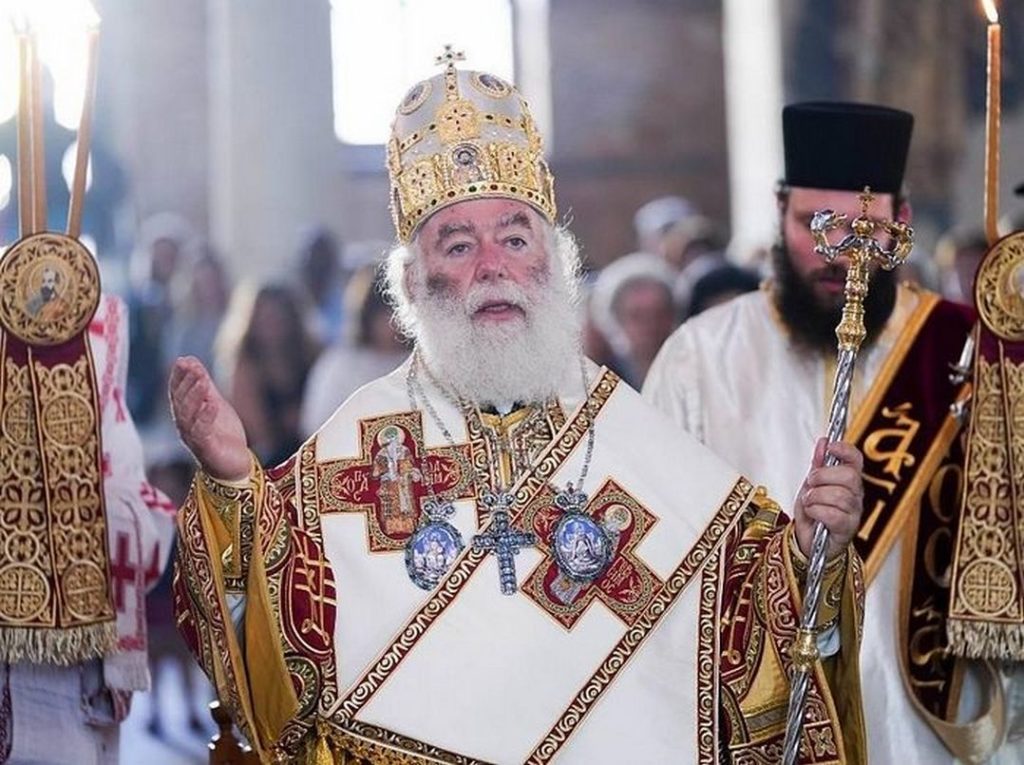 Patriarch Theodoros II of Alexandria and All Africa

[Daher, Egypt] His Beatitude Patriarch Theodoros II of Alexandria and All Africa commemorated Epiphany Dumenko, the primate of the schismatic “Orthodox Church of Ukraine,” during the Divine Liturgy today at the Church of the Archangels in Daher in the Cairo Governorate.

The commemoration can be heard in a video of the Liturgy posted on the Archangels Rum Orthodox Church Facebook page around 45:30 (https://www.facebook.com/archangelsgreekorthodoxchurch/videos/2497852933641620/)

During the Great Entrance of the Divine Liturgy, the primates of the Local Churches commemorate the other primates with whom they are in communion, thus commemoration of Epiphany constitutes official recognition of the canonicity and autocephaly of the OCU.

Today’s commemoration was not preceded by any decision by the Holy Synod of the Patriarchate of Alexandria on the matter.

After many months of being recognized by the Patriarchate of Constantinople alone, the OCU was also recently recognized by Archbishop Ieronymos of Athens and All Greece.

Pat. Theodoros, whose Patriarchate is heavily dependent upon the Greek Foreign Ministry for funds and diplomatic help, visited Odessa in September of last year to encourage the faithful of the canonical Ukrainian Orthodox Church under His Beatitude Metropolitan Onuphry of Kiev and All Ukraine to remain loyal to Christ in His Church and to cling to their holy primate, Met. Onuphry.

“I have come here to tell you: Remain in the Orthodox faith, in the canonical Church. The apostle Peter saw the tunic of Christ torn in the first century. This tunic was bloodstained for many years, and we must carry this tunic in our hearts. There have been very difficult times in the history of our Church. In these difficult days in Ukraine there is a canonical Church, headed by His Beatitude Metropolitan Onuphry—a blessed man of God and a true monk,” he said.

The Patriarch previously served as the representative of the Alexandrian Patriarchal throne in Odessa from 1985 to 1990, at a time when the Ukrainian schismatics were just beginning. In an interview in June, he stated that he knows the pain of the schisms in Ukraine firsthand, having lived and served in Odessa for a decade. He also notes his Patriarchate’s close historical and present ties with the Russian Orthodox Church: “The ties between the Alexandrian Patriarchate and the Russian Church are great and it is impossible to break them.”

“Тhese people who received autocephaly are what divides the Church,” he said in the same interview.

Patriarch Theodoros also previously called for a conciliar solution to the Ukrainian crisis.

Related Article
PATRIARCH OF ALEXANDRIA: I DECIDED TO COMMEMORATE EPIPHANY AFTER PRIVATE DISCUSSIONS WITH BISHOPS AND TIME OF PRAYER – Orthodox Christianity