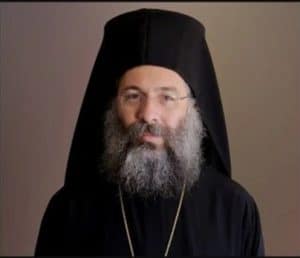 BOSTON – One more hierarch, the newly elected and enthroned Metropolitan Prodromos of Rethymnon (Crete), as well as Grand Ecclesiarch and Director of the Patriarchal Office Archimandrite Aetios will comprise the three-member delegation of the Ecumenical Patriarchate headed by Metropolitan Geron of Chalcedon Emmanuel to the Clergy Laity Congress in New York. This year the Archdiocese is celebrating its centennial.

As The National Herald reported in last week’s edition, His All-Holiness Ecumenical Patriarch Bartholomew is sending his closest associate, His Eminence Geron Metropolitan of Chalcedon Emmanuel, to represent him at the upcoming 46th Clergy-Laity Congress of the Greek Orthodox Archdiocese that will be held July 4-7 at the Marriot Marquis hotel in Manhattan.

The Archdiocese will also bring singer Despina Vandi to perform at the Grand Banquet of the Congress on Thursday, July 7, as was announced on the official Web of the Archdiocese.

The theme of the Congress is ‘Legacy, Renewal, Unity’ and Archbishop Elpidophoros has appointed as his Co-Chairs Chrysanthy Demos and Nick Karacostas. It will be the first in-person Clergy Laity Congress of the current Archbishop. The previous one, in 2020, was held virtually due to COVID-19. The last-in person Congress took place in 2018 in Boston during the tenure of Archbishop Demetrios, formerly of America.

Archbishop Elpidophoros is currently in Turkey. He left Sunday night this week after the Greek parade in Manhattan that celebrated the liberation of Greece from the Turks. He is the guide for a group of Greek-Americans to the historic and religious sites of Pontos and Constantinople. They will also be present for the name day of Patriarch Bartholomew on June 11.

The National Herald has learned that the Archbishop has requested to meet on June 9 with the Committee of the Eparchies of the Ecumenical Throne Abroad in order to discuss the Charter because there has been confusion, questions, and intense concern among the clergy and the laity as well because the Charter was revoked on Thursday October 8, 2020 by Ecumenical Patriarch Bartholomew and the Holy Synod around him upon the recommendation of Elpidophoros without the knowledge of the Eparchial Synod and the Archdiocesan Council – although he claims that the Charter continues to be in effect.

It is emphasized here that there is a danger of legal and other complications and problems not only in the State on New York, where Archdiocese has its headquarters and is registered as a religious entity but also in the state and cities where the Metropolises and parishes operate. It is noted here that Metropolitan Geron Emmanuel of Chalcedon is the Chairman of the Committee of the Eparchies of the Ecumenical Throne Abroad.

Article 25 of the 2003 Charter which was revoked but is still in effect states the following: “The present Charter regulating the affairs of the Holy Archdiocese of America as an ecclesiastical institution, may be amended in its entirety or in part after a proposal of the Holy Eparchial Synod submitted to the Ecumenical Patriarchate following the appropriate procedure in the Archdiocesan Council and the Archdiocesan Clergy-Laity Congress, and after the approval of the Holy and Sacred Synod of the Ecumenical Patriarchate to which the proposal has been submitted.”