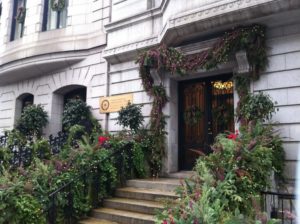 The front entrance of the Greek Orthodox Archdiocese of America headquarters in New York City.

CONSTANTINOPLE – An extensive discussion took place during the recent meeting of the Holy Synod of the Ecumenical Patriarchate on March 7 regarding the article of The National Herald about the $10 million dollar bank loan that the Greek Archdiocese of America is trying to acquire, using the two buildings of its Manhattan headquarters as collateral.

Specifically, Synod members asked Metropolitan Evangelos of New Jersey about the loan. He said he didn’t know anything about it and refereed all questions to Archbishop Demetrios, who is serving also as a Synod member during the current period.

The archbishop didn’t answer directly but said “we are not going to lose the buildings.” He explained this is the process: when you seek a loan, you should list all your property as collateral.

This is the first time in the history of the Church in America that the Archdiocese is forced to place its headquarters as a guarantee in order to get a loan to pay its debt.

Those buildings were purchased by the late Archbishop Athenagoras of America who later became Ecumenical Patriarch, with small contributions of $1-$10.

Rumors have circulated that the Archdiocese went bankrupt because of the many millions it gave to the Patriarchate. That forced Ecumenical Patriarch Bartholomew to react. He said to Demetrios: “please do not allow anyone to blame the Patriarchate for the Archdiocese’s economic situation.” Demetrios agreed, and said no one is saying such things, to which the patriarch replied: “we have been informed those things are being said, including by CFO Fr. Soterios Baroody.”

Patriarch Bartholomew also said that such rumors were said during an Archdiocesan Council meeting, to which there was no rebuttal. Demetrios did say: “Yes, Your All Holiness, you are correct. These things are not true. How is it possible that you are responsible for our problems? The one million dollars that we give to the Patriarchate is nothing.”

At that point, Metropolitan Evangelos of New Jersey intervened and told Bartholomew that “these things have been said; we can’t say that they are not said.”

Metropolitan Kyrillos of Rhodes asked Demetrios how much the Archdiocese’s annual budget is. The archbishop replied that it is between $19 and $20 million. Kyrillos then said: “you only give five percent to the Mother Church. Do you know how much we give from our income? Forty percent. The archbishop was speechless, but after the Synodal session, he approached Kyrillos, complaining: “Why did you do this to me? You put me in a difficult position.”

TNH reported about the $10 million loan recently, after it was revealed during the March 1 meeting of the Boston Metropolis regarding the Archdiocese’s finances. TNH has learned that parish representatives at that meeting were concerned that the questions TNH raised in its reporting about the finances were not addressed.

Also, many raised questions privately about the Metropolis’ administrative and financial issues, such as who comprises the Metropolitan Council, when were elections for its renewal last held, why the local Clergy-Laity Congress was not held in 2017 or thus far in 2018, and no financial report – as the Archdiocesan Regulations require – was not given.

TNH has also learned that parish council members will submit a number of issues and questions at the 44th Clergy-Laity Congress in Boston, which will take place July 1 to 5.