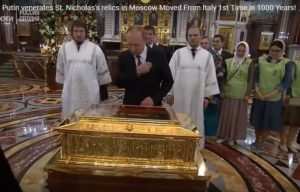 Russian President Vladimir Putin makes the sign of the cross as he venerates the relic of St. Nicholas in Moscow’s Christ the Savior Cathedral.

And it’s the real Santa Claus—St. Nicholas himself, a relic of the actual saint who inspired the beloved figure of Santa Claus.

The relic of the fourth-century saint arrived in Moscow for veneration by the Russian Orthodox Church on May 22 from Italy—the first time in 930 years that the relic was moved out of Italy, Breitbart reported.

It will be on display at Christ the Savior Cathedral in Moscow up to July 13, according to RT.com.

The relic is a five-inch bone fragment from the saint’s rib placed in a golden reliquary adorned with precious stones and bas reliefs that recount the life and miracles of Nicholas, according to Breitbart.

In the weeks since the relic arrived in Moscow, more than 300,000 people have stood in huge lines for up to 10 hours to visit the gilded ark containing the relic, the Associated Press reported.

The massive turnout to see the saint’s relic showed how strongly the Orthodox Church has become a part of Russian life 26 years after the collapse of the officially atheist Soviet Union, according to AP. It pointed out that majority of the Russian people strongly identify with the Orthodox faith even though they remain predominantly secular and have opposed church-backed plans such as a ban on abortions or public school classes on Orthodox Church teachings.

President Vladimir Putin, who once reportedly said he was secretly baptized in the Russian Orthodox Church as a baby, even paid his respects to the relic, kissing the ark on the day it arrived in Moscow.

Nicholas, who died in 343, is considered the most popular saint in the Russian Orthodox Church, credited with miracles and with preventing catastrophes in Russia—even though he never set foot in the country.

His popularity has drawn even people who are not regular church-goers to visit the cathedral to see St. Nicholas’ relic and pray for the saint’s miraculous intercession in their lives.

Russia has seen a Christian revival since the Soviet Union began to crumble in the late 1980s. The percentage of Russians calling themselves Christian Orthodox rose from 17 percent to around 77 percent, according to the independent Levada Center polling and research organization.