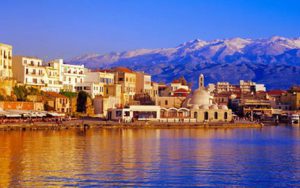 I had prepared myself to go to Chania, Crete and see, as a reporter, the events and hear the commentary and behind-the-scenes events that would be part of the excitement and surroundings of this monumental historical event, the Holy and Great Council of the Orthodox Church.    I sent in the information that was necessary to be approved as an observer.  The approval came.  I was excited about going.  I have been an advocate for the Council for 28 years.  In 1994, I was a member of a delegation sent to meet with His All Holiness Bartholomew.  He expressed his determination to call the Council. I have written many articles since 1994 about the need for the Council.  Orthodox Christian Laity (OCL) has provided coverage on its web site (ocl.org),  of the developments pertaining to the Council since 2008. Two days before my departure, I fell doing yard work, and broke my wrist. I had to cancel my trip.  Indeed,  I was disappointed.

For the past three months, I was following the developments and preparations.  We know that His All Holiness had the courage to proceed with the Council even though 4 Churches backed out within the month immediately prior to the Council.   They were committed to the Council since 2008 but found excuses not to participate, including the seating protocols.  The positive is that it did take place.  The staff of the Patriarchate was efficient and visionary.  The agenda that was agreed upon was adhered to.  His All Holiness kept the meeting going and kept it focused.  All those who wanted to speak had the opportunity to speak.

My last published article in The National Herald stated that the world would be watching the work of the Council; and indeed, we have watched.  Reuters, the Associated Press and the New York Times as well as other newspapers around the world reported on the event.  Having tried to digest reports from around the world, I agree with the conclusion reached by Victoria Clark in her interesting book, “Why Angels Fall.”  The bishops have fallen from the “sublime ideal dreamed up in Byzantium,” because they cannot give up their parochial and nationalistic ways.  They are prisoners of history.  Some bishops still want to conceal their spiritual treasures from the world.  “That heinous religious nationalism with its persecution and martyr complexes and longing for death and suffering, that targeting of enemies and dangerous emotive habit of spinning pretty patterns from the past — mythologies instead of histories — will have to go.”  Symphonia was not what the bishops wanted; and therefore, the achievements of the Council were limited.  The bishops cannot even come to terms with the concept of consensus.  The Holy Spirit was hard pressed to be heard.

It is time for others to come forth to move the Church forward.  In the lands outside the traditional Orthodox nations, it is necessary for the laity to move forward together in all the parallel jurisdictions to help the bishops move ahead.   The situation in these land is uncanonical, and the “new ecclesiology” of trying to rationalize the ethnic, national point of view to keep the Church in a colonial state is unacceptable.  Our faithful keep walking away.  Some archdioceses have lost 38 percent of their stewards in 20 years.  The divide and conquer strategies of the Patriarchates is not working in nontraditional Orthodox lands.  It is time to create autocephalous Churches in the USA, Europe, Canada and Australia. New ethnic Metropolitanates  in these lands are not a solution and will not work.  The laity must stop being enablers of what does not work.  In the USA, we need to see how we can work to bring more of those leaving to transfer to the Orthodox Church in America (OCA).  The Council called for the continuing work of resolving these discrepancies within the “diaspora” Churches.  Let us hope that the gauntlet is picked up by our hierarchs with layperson involvement in the USA and around the world.  It is our duty and responsibility to help the hierarchs move forward.