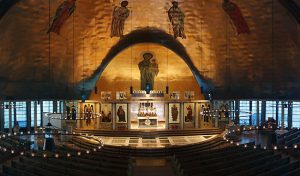 George Karcazes and I were among the hundreds of mourners attending the funeral services of our departed brother in Christ and OCL board member and former President Peter Haikalis. The services conducted on March 25 and 27, 2017 were somber and joyful under the copper dome, extraordinary light and mystical iconography which characterizes the Cathedral of the Ascension in Oakland, California. The setting for both the Trisagion and funeral was magnificent. Peter’s beloved Cathedral Choir added beauty and grace to both services.

Peter was eulogized as a visionary by His Eminence Metropolitan Gerasimos of San Francisco following the Trisagion. The questions and issues he raised as an educator, activist and change agent were necessary for the institutions of the Church and Hellenic culture to continue to progress in our multicultural, secular environment. In his thoughtful eulogy following the funeral services, Metropolitan Nikitas of the Dardanelles, noted the challenges that Peter presented as part of his life’s work must be addressed to maintain the good order and growth of our Church and its educational mission. Both prelates stated that it is necessary to raise questions and praised Peter for actively working to seek answers and working within and staying involved. His legacy is that he is a role model. Both prelates noted his work and leadership skills in so many community and church organizations including Orthodox Christian Laity.

Both prelates also seem to agree that Peter is a role model and that his legacy will live on, because he was a faithful, dedicated Orthodox Christian. Father Tom Zafaras and Father Tom Paris presented personal insights into the life and work of Peter and his involvement in the liturgical life of the Church as a choir member for 60 years.

He was laid to rest on a beautiful hillside overlooking Diablo Mountain. May His Memory Be Eternal. We pray for Susan, and their daughter Ioanna, son in law George and grandchildren Cecilia and William.