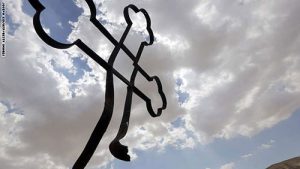 The Patriarch of the Syriac Catholic Church of Antioch, Ignatius Joseph III Younan, recently addressed the Knights of Columbus, a Catholic group, at its annual conference. Here is a slightly abridged text of his passionate speech about Christianity in the Middle East.

I would like first of all to apologize if I become too emotional. Because I’m not talking about theories based on socio-political and religious-historical analysis of the tense relations between Islam and Christianity. My intention is to raise awareness of the real threat to the very survival of Christians in Syria and Iraq.

“Will we ever return?” This is the question we hear most, when visiting our Christian flock, uprooted from their ancestral land in the Plain of Nineveh. On the night of August 6-7, 2014, 150,000 some 40 percent of all Christians still living in Iraq since the so-called Allied invasion in 2003 were expelled! They had nowhere to flee except nearby Kurdistan. Two years have passed since that catastrophic eradication, and still there is no real solution!

In Mosul too, Christian and other minority groups were murdered, women and children were raped and abducted by the so called Islamic State of Iraq and Syria… The letter “noon” was the only sign left to remind us of a 2000-year presence of Christians in Mesopotamia!

Because they feel abandoned, Christians in Iraq are nearly in despair! Is the behaviour of the so-called powerful nations naive, cowardice or a pure Machiavellianism? It is up to you, my dear friends, to make a judgement!

For five and a half years, the sectarian war in Syria has raged. The devastation in this country is beyond all description. Hundreds of thousands have died, millions are displaced, and the influx of migrants continues to threaten the lives of desperate people, as well the whole Europe. It is a hecatomb that fell on Syria, a country that had one of the most secularized governments in the Middle East.

We, the Church pastors, kept warning Westerners who pretended to have the right to interfere in Syria in the name of democracy, that fomenting violence would surely lead to terrible sectarian war because of the complex religious and ethnic diversity in Syria. We knew innocent people, primarily Christians and minorities, would suffer most.

The devastation, killings and kidnappings have spread all over the country. Syria is the most dangerous spot on the planet. Half a million Christians are gone. More than 140 churches and ancient monasteries were desecrated, abandoned or completely destroyed. Two Archbishops were kidnapped three years ago. Their fate is still unknown. Clergy are slaughtered. Civilians used as human shields. Most of all, Islamic Wahabism, the worst among radical religious groups, is rising and spreading! It is as we warned.

It is time to bring the plight of Christians and all innocent people to the international community: the UN Security Council, the USA, the European Union, as well to Russian Federation and China. Our Churches go back to the first Christian communities, in their liturgy, traditions, culture and language. They are now a kind of endangered species, that could be wiped out for good! We have to understand that totalitarianism based on Islamic creed, is the worst among all systems of government! Yes, my friends, the very survival of Christians in the cradle of Christianity is quite in danger!

What we can do?

This is the question we often hear from our friends in the West.

First, among the Catholic Charity Organizations, I would like to warmly thank the Knights of Columbus for their Christian solidarity in supporting the suffering people in Syria and Iraq. Your founder, the Venerable Father Michael J. McGivney, had an inspiring vision of how Catholics would live their Christian calling, in a very turbulent and hostile world. The Supreme Knight, as well his brave assistants, did in fact succeed in the past years, raising awareness about the horrible situation facing their Christian brethren and the devastation of land and ancient civilizations in the Middle East. They courageously defended the innocents and denounced the abuses of human rights committed by Islamic terrorists in Iraq and Syria. Thanks to their solidarity and tenacity, their input was definitely helpful in securing the genocide declaration by the US State Department, and the votes in both Houses of Congress.

Yes, this is occurring in the 21st century, a hundred years after the genocide of Christians in the Ottoman Empire, called by Pope Francis the first genocide of the 20th Century. This present Genocide is happening under the eyes of the whole world and the global indifference is stunning!

Some voices would quickly protest saying that more Muslims were killed at the hands of ISIS. We Christians, however, have been singled out because of our faith. We are often accused of being the “fifth column”, allied to the so called “colonialist” countries of the West! Christians are a tiny, peaceful minority. They are law-abiding citizen in Iraq and Syria, who never made enemies or took part in a sectarian conflict. They never attempted to attack or conquer lands nor had any ambition to topple governments.

It is time to speak with a clear voice, telling the truth without politically correct language, about an abnormality in dealing with the important issue of the religious freedom, not only in your countries but also in the Middle East. The First Amendment indeed clearly says:

“Congress shall make no law respecting an establishment of religion, or prohibiting the free exercise thereof …”

Some countries with Islamic majorities still rule with religion and state joined together. They are allies of the West and enjoy full membership in the UN, while refusing a quintessential principle of the Universal Declaration of Human Rights, religious freedom!

Why shall we wonder at the rise of the Islamic State or its new “Caliphate”, when these “allied rich countries” – with among the most retrograde systems of government – continue to channel funding and weapons to terrorists spreading hatred and committing barbaric atrocities in the name of a religion?

Have we had the courage to consider the aims, goals and methods of each political, social or cultural organization based on Political Islam, where an amalgam of religion and politics is quite normal, even worse, it is a precept? Look for example at the Motto of the “Muslim Brotherhood”, founded in 1928. It says:

“Allah is our objective. The Prophet is our leader. The Qur’an is our law. Jihad is our way and dying for God is our ultimate desire.”

Have we ever asked ourselves, for instance, about the many interpretations of the word “Jihad” as one of the five precepts in Islam? Have we ever heard what today’s “jihadists”, mostly brainwashed youth, were calling for, claiming about and boosting in cold blood their aberrant barbarism!

And yet, out of political correctness, some politicians, scholars and media people among us, often want to find excuses for those “Jihadists”, theorizing on socio-economic and cultural as well as hypothetical grievance and injustice!

Nicholas Kristof wrote recently in the New York Times: “Whenever there is a terrorist attack by Muslim extremists, we look to our enemies like the Islamic State or Al Qaeda. But perhaps we should also look to our ‘friends,’ like Saudi Arabia.” For decades, Saudi Arabia has recklessly financed and promoted a harsh and intolerant Wahhabi version of Islam around the world in a way that is, quite predictably, producing terrorists.”

Christians of the Middle East have tried to live and act as peacemakers, tolerant, hard workers and promoters of civilized reforms. However, this seems to be meaningless to the Western powerful nations whose politicians betray their own principles and abandon Christians and other minorities of the Middle East. Sadly, Western politicians mostly are moved by three factors where ethics and principles are absent:

They are complacent with the growing numbers of one “umma” or nation, believed to unite hundreds of millions in the name of Islamic religion,

They are greedy to benefit from the richness in natural resources of oil producer countries that create opportunities, and

They are so fearful in front of a rising Islamic radicalism.

These three factors seem to be the main concern of the so called civilized nations of our times. And because Christians of the Middle East have none of the three factors, they are lacking the needed international support.

Tell the truth in charity

Western countries are naive and complicit by tolerating the mingling of religion and state as practiced in Arab countries, with the exception of Lebanon. It is time to tell the truth in charity. For that, I think we must avoid three false steps and implement other three positive ones. To help our Muslim brothers and sisters overcome today’s global crises that would undermine their religion, I suggest avoiding the following three false attitudes:

Paternalism: This common attitude in the West towards people of the underdeveloped countries has its roots in considering the latter inferior, deserving tolerance even a pandering attitude, because being of different region and culture. Out of exaggerated compassion, there is a tendency of excusing the lack or the delay of integration of Muslims in the Western countries. Someone would say: they still need time to rise to the level of Western civilization! Meanwhile, it is said: let us profit from their natural resources!

Opportunism: Oil-rich countries in the Middle East have a large majority of Muslim population ruled by Muslim governments. Economic opportunism seems to be the best way to keep the oil flowing and provide the best trade deal. It is time to stop pandering to those rulers and governments and to start looking for the real good of the peoples of the region.

Quite often many Westerners confuse Islamic religion and culture and accept without hesitation the assertion that in Islam there is no way to separate religion and state. Scholars, the media and politicians in the West do not hesitate to talk about “Muslim political parties,” “Muslim Civilization” and the “Muslim World”. They are unwilling, however, to mention anything reminding Europe of its history, which was for millennia permeated by Judeo-Christian values!

Ignatius Youssef III Younan is the Patriarch of the Syriac Catholic Church of Antioch.