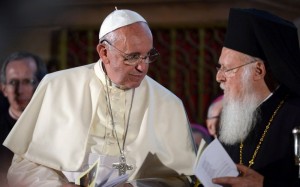 Meeting the head of the Eastern Orthodox church, the pope set a date for a third historic meeting of Christian factions—a savvy move to control how his successors lead.

After all the speculation surrounding Pope Francis’s ability to engineer peace on his big Middle East trip, the biggest news from the visit came from his visit with Patriarch Bartholomew I, the primary leader of the Eastern Orthodox Church. Not to gloat, but we totally called it.

Following the meeting, Bartholomew gave an interview in which he said that he and Francis are planning a gathering in 2025 in Nicea. The purpose of this meeting? “To celebrate together, after 17centuries, the first truly ecumenical synod.” That’s right: another historic meeting in Nicea, the place known as the birthplace of Christianity as we know it today.

As every media outlet on the planet reminded us, the original Council of Nicea was held in 325 C.E. in modern-day Iznik, Turkey. It was attended by hundreds of Bishops and produced the Nicene Creed, the formulation of the faith that continues to be used to this day and is often regarded as the definition of Christianity. (Ever attended church and confidently proclaimed, “God from God, light from light, true God from true God…” only to drop your head and mumble through the rest? That was the Nicene Creed you were butchering.)

So the date and location are symbolically important. Despite the slight difference in the terminology (the 2025 meeting is a synod, not a council) this is a conscious effort to evoke the idea of a unified church. They want us to think of the Council of Nicea. This is about harkening back to a simpler time, when children knew their place, handwriting mattered, and there was only one united, universal, and apostolic church.

Lovely, except that the church was never wholly unified and the Council of Nicea wasn’t a Sunday school picnic.

When the first council was called, there was no formal doctrine of the Trinity. Christians might have broadly agreed that Jesus was God, but they disagreed about how and in what sense. The key issue was the relationship of the Son to the Father and whether or not Jesus the Son was made of the same stuff as God the Father.

When the council convened, the church was an organizational mess. Attendance was a bit spotty, especially from the Western part of the empire. Even Sylvester, the bishop of Rome, sent two delegates instead of going himself.

Those who did attend disagreed with one another. People often talk about there being an Arian party, led by Arius, which thought that the Son was a creature subordinate to the Father, and a Nicene party, which thought that the Son was of the exact same substance as God and existed even before the creation of time. In fact Christianity was eveore divided than that. As Lewis Ayres shows in his book Nicaea and its Legacy, there were numerous points of disagreement and dissent. It was less of a duel and more of a WWE-styled battle royale.

Much of the theological dispute might seem like hair-splitting, but the stakes were high. According to legend, Nicholas, Bishop of Myra—Santa Claus to you and me—punched out Arius rather than listen to his arguments. This might be why he tends to come and go in the dead of night, rather than stick around for those inevitable family arguments during Christmas lunch.

The council concluded with the emperor Constantine insisting that the bishops come to an agreement over the wording of the creed. He wanted peace and harmony, and in this respect he was just another Roman ruler interested in imperial unity.

The eventual outcome of the council was that Arius lost by a vote of 318-3. He was denounced as a heretic and the Son was declared to be of the same exact substance (homoousios) as the Father. A clear result, a poetic creed, and most people were happy. That was that.

Except that it wasn’t. There was another council 60 years later to fine-tune the wording of the Creed, and Arius and his supporters continued to believe and preach exactly what they thought before.

In sum, the Council of Nicea was less about celebrating unity than enforcing theological uniformity. In some ways it’s reassuring: when we disagree about church doctrine we can take comfort in the knowledge that if we’re not resorting to physical violence (looking at you, Santa) we’re coming out ahead.

Whatever inaccurate mythology is being promoted in the publicizing of “Nicea III,” it’s clear that this is a stroke of political genius on the part of the leaders of two of the largest denominations in Christendom. Bartholomew said that he and Francis wanted to leave the synod as a “legacy to ourselves and our successors.” Neither are young men, and there’s a strong possibility that they may both be dead by then.

This is a bold move. Despite the power and the pageantry, popes struggle with leaving a lasting impact on their churches because, theoretically, their successors can mix things up. By announcing this meeting with such feel-good publicity, they are placing their successors in quite a bind. Even the grouchiest pope will feel compelled to show up. It’s more evidence that Francis is interested more in controlling the direction of church leadership than in micromanaging the lives of the laity.

A lot of the buzz surrounding this meeting suggests that Francis is doing more than reforming the Catholic Church; he’s changing the face of Christianity. But one question still needs to be asked: if this synod is, as Bartholomew suggests, a truly ecumenical council, will they be inviting any Protestants?