Son of the Rev. Gabriel Nadaf attacked, apparently in response to his father’s call to Christian Arabs to join Israeli military • Netanyahu: I will not tolerate this. We will use every mean at our disposal to stop these thugs so that Christians can enlist. 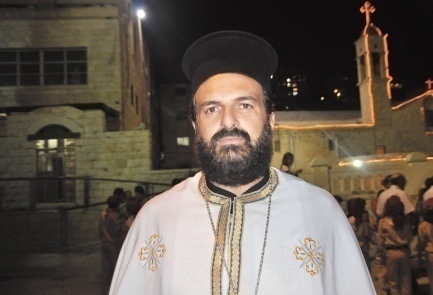 Father Gabriel Nadaf has had to sustain a barrage of criticism over his unorthodox stance on Arab integration | Photo credit: Michel Dot Com

The Rev. Gabriel Nadaf, a Greek Orthodox priest and one of the leaders of the Christian Arab community in Israel, has had to sustain a barrage of criticism — including threats and slurs — over his efforts to convince Arab youth to enlist in the Israel Defense Forces. But on Friday the attacks turned violent when his 17-year-old son was allegedly assaulted by a member of a group that opposes Arab conscription.

According to some accounts, Nadaf’s son was walking down the street when a 21-year-old political activist who had been following him started hurling insults at him. At one point the agitator apparently hit him with a stick.

In the wake of the altercation, both filed a complaint with the Nazareth Police. Nadaf, who was briefly hospitalized, was called in for questioning, as was his alleged attacker. Both were later released, although the police imposed some restrictions on their movement.

Nadaf condemned the attack on his son saying, “The Arab parties have been inciting against me ever since I started calling on Christians to join the military or participate in other forms of national service. The incitement turned from verbal threats to severe physical violence.”

He added that his wife “would not leave home and my other son, who is 15, fears being hurt if he steps out of the house.”

“The boundary is where people hurt other people, and we do not accept this crossing of boundaries. I call on the Hadash, the National Democratic Assembly and Ra’am-Ta’al parties to condemn incitement and violence,” Nadaf continued.

Matan Peleg, the national operational director of the Im Tirtzu movement said that “attacking the priest’s son is a most dangerous escalation.”

Nadaf, who with the help of Im Tirtzu established the Forum for Drafting the Christian Community has been hounded by Arab leaders. He has won the support, among others, of Prime Minister Benjamin Netanyahu, the Defense Ministry and various MKs, but was exposed to threats and incitement. In one instance, someone placed a blood-soaked rag at the entrance to his home, and in another case a YouTube video appeared calling him a “traitor to his nation,” and a “Zionist agent.”

Arab MKs rejected the priest’s remarks. MK Basel Ghattas (National Democratic Assembly) said, “There is no connection between the attack and his objection to IDF service. I condemn every form of violence, but there is no indication that the attack was carried out for that reason. A senior member of one of the parties said, “Even if we don’t agree with this man’s views, violence is unacceptable and wrong and we all condemn it.”

Netanyahu issued a strong rebuke at the weekly cabinet session on Sunday. “This is highly disturbing; I heard that there were physical attacks by extremists on Christians, Christian Arabs who want to enlist in the IDF and who want to be part of the State of Israel … this will not stand; I will not tolerate this. We will use every mean at our disposal to stop these thugs and we are going to let anyone who wants to have a greater role in the Israeli experience and become part of the IDF — be they Christian, Muslim, Druze — do so … we will protect you.”