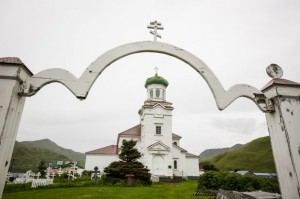 A man went on a rampage last weekend in Unalaska, allegedly vandalizing a church and biting a police officer after stealing a truck.

Frustrated at being stuck at the Unalaska airport for days trying to fly out standby, a man stole a pickup truck parked in the unloading zone, drove across town and broke into and vandalized the historic Russian Orthodox Church, according to local police.

Ishmael Guerrero, 33, of Fresno, California, was arrested Sunday at the Holy Ascension Russian Orthodox Church, and arraigned in court the next day on numerous criminal counts, according to Deputy Police Chief Michael Holman of the Unalaska Department of Public Safety.

Guerrero broke down the church door, entered the historic building, and broke a candleholder and other objects, before he was restrained by an off-duty state trooper and two other local residents, Holman said.

“This is by far the worst damage somebody’s done,” said church council member David Gregory, who said the few past incidents were less destructive, like spray-painted graffiti two years ago, and a rock thrown through a window years earlier.

“Understandably, people are pretty upset,” and wonder why the church was attacked, Gregory said. “Its been sitting there for a long time, and people have always respected it.”

Despite behavior suggesting otherwise, Guerrero was not intoxicated, not at the church, nor at the airport where police had contacted him the previous day when he was loudly complaining of his inability to leave the island, where he had been employed as a processor for a local seafood company, according to Holman.

“However, he was acting very strangely,” Holman said.

The airport was very crowded, with the Bering Sea commercial fishing A season ending, and fishermen and other seafood workers and local residents all trying to get on a plane to Anchorage, he noted. Guerrero didn’t have a reservation until days later, Holman said. The stolen vehicle is owned by Unisea, he said.

The vehicle was reported stolen at 12:45 p.m. Sunday, according to Holman, who said the two incidents happened in a very short period of time. Gregory said the church vandalism occurred about 1 p.m., when the church was empty, although Sunday services had concluded only about an hour earlier.

When police arrived at the church to arrest Guerrero, he bit one of them, Holman said.

On Monday, Guerrero appeared in state court and was charged with vehicle theft, burglary, criminal mischief for property damage estimated at over $2,000, assault on a law enforcement officer, resisting arrest, disorderly conduct, driving without a license, and damaging a historic archaeological resource because of the church’s status as a National Historic Landmark, according to Holman.

The church dates back to when Alaska was part of Russia, in the 1800s.

Gregory said the damaged antique candle stand should be repairable, although it may require the services of a metal smith to heat and re-bend the heavy object that he estimated at 60 pounds. Guerrero allegedly picked it up and threw it, bending it about six inches.

The church door has been temporarily secured, but it too is a historic object requiring specialty carpentry skills that may be available from the National Park Service, Gregory said. He said a carpenter skilled in historic preservation has worked on the church previously, through the Park Service, which is involved because of the church’s historic significance.

“We’re going to work with the Park Service and get it fixed,” Gregory said.

Holman said Guerrero remained in jail Monday, with release conditions specifying a third party custodian, and other requirements to be discussed later if somebody was available for that role, Holman said.

Guerrero was first contacted by police on Sunday, when Alaska State Trooper Sgt. Robin Morriset said he saw the pickup truck speeding down West Broadway. When the vehicle stopped in front of the church, Morriset said he found out that Guerrero lacked a driver’s license, so he requested other identification.

While he was checking the identification, Morriset said the man said he wanted to go take a look at the church, and the trooper said he didn’t have any problem with that, since he was unaware at that time that the vehicle had been stolen.

But then Guerrero broke into the church, and went inside and started breaking things, Morriset said.

“He just said it was his church,” Morriset, who said he disagreed, telling him, “it’s God’s church.”

“We’re just happy somebody was there and able to get him out before he did any more damage. He was pretty crazy,” Gregory said.

Jim Paulin can be reached at [email protected].