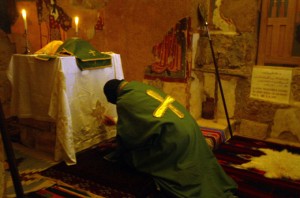 The appeal comes after a Christian group retracted its claim that the clerics had been freed.

Pope Francis has called for the release of two Syrian bishops kidnapped by gunmen near Aleppo, after a Christian group appeared to retract its claim that the clerics had been freed.

Speaking to an audience of around 100,000 at the Vatican on Wednesday, Francis said there were “contradictory reports” about the fate of the bishops and asked that “they be returned quickly to their communities”.

On Tuesday, the “Oeuvre d’Orient” Christian association announced that the bishops had been released, but on Wednesday it backed away from the claim.

“Yesterday evening we received information from the Greek Orthodox Patriarchate questioning the release of the two bishops,” said Catherine Baumont, spokeswoman for the group, which works to help Middle Eastern Christians.

“Unfortunately no tangible proof of the release has been obtained. The situation remains unclear, and we still don’t know who took them,” Baumont told AFP news agency.

And a source in Aleppo’s Greek Orthodox archdiocese told AFP it had no news on the fate of the bishops.

“We have no new information,” said Ghassan Ward, a priest at the archdiocese.

“We can say that (as far as we know) they haven’t been freed,” he added.

Ward said there had been “no contact with them,” adding that “efforts are continuing” to secure their release.
“We are very worried,” he said.

The two men were travelling from the Turkish border when armed men intercepted the car they were in, forcing them out of the vehicle, Syrian state media and church sources reported.

No group has claimed responsibility for the kidnapping.

Christians account for around five percent of Syria’s population, and have become increasingly vulnerable to attack and abductions in the lawlessness that has engulfed much of the country since March 2011.