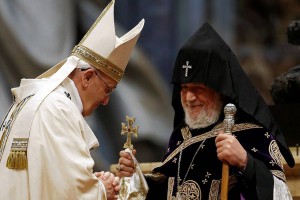 Pope Francis, left, is greeted by Karekin II, head of the Armenian Apostolic Church, at a mass on Sunday. PHOTO: GREGORIO BORGIA/ASSOCIATED PRESS

FRANCIS X. ROCCA in Rome and
EMRE PEKER in Istanbul
Pope Francis described the 1915 mass killings of Armenians by Turks as the “first genocide of the 20th century” on Sunday, touching off a diplomatic furor with Turkey and entering into a tense historical debate with wider implications for the Vatican’s relations with Islam.

Turkey, which has long rejected the term genocide to describe the killings, swiftly called its ambassador to the Vatican back to Ankara for consultations after the pope’s remarks. Turkey’s foreign ministry also summoned the Vatican’s envoy to Ankara, informing him that the government was “disappointed and saddened” by the pontiff’s comments, according to Turkey’s state-run Anadolu news agency.

The pope, speaking at a mass in St. Peter’s Basilica to mark the 100 years since the killings, addressed the massacres in the context of the contemporary persecution of Christians in the Muslim world. That subject has become an increasingly pressing themefor Pope Francis—who, before becoming pontiff, had close ties to Buenos Aires’s overwhelmingly Christian Armenian community.

Even as he has continued to call for better relations between Catholicism and Islam, the pope has urged Muslim leaders to denounce the actions of extremists and pushed Christians of different churches to stand together in the face of anti-Christian violence.

The pope’s statement is a boost for Armenia’s decadeslong campaign to define the killings as genocide, as well as a setback for Turkey’s efforts to fend off the accusations of systematic killing.

Armenians—the vast majority of whom are Christians—say that as many as 1.5 million Armenians were systematically killed during World War I in today’s eastern Turkey, which was then part of the Ottoman Empire.

A number of countries officially recognize the killings as genocide. But Turkey contests Armenian claims about the scale of losses; it argues that hundreds of thousands actually died in warfare and famine, and that many Turks were also killed by Armenians. Turkey argues that the question of genocide should be left to historians rather than politicians.

Pope Francis said Sunday that “it is necessary, and indeed a duty,” to “recall the centenary of that tragic event, that immense and senseless slaughter whose cruelty your forbears had to endure…Concealing or denying evil is like allowing a wound to keep bleeding without bandaging it.”

Turkey accused the Vatican of using history for political aims: by singling out Armenians and not mentioning all lost lives in Anatolia during World War I. Prime Minister Ahmet Davutoglu said the comments were “not fitting of the Pope.”

“The Pope’s declaration, divorced from historical and legal facts, is unacceptable. Religious posts are not positions to stoke hatred and grudges on baseless claims,” Turkish Foreign Minister Mevlut Cavusoglu said in a message from his official Twitter account.

It wasn’t the first time a pope has called the 1915 deaths genocide. Pope Francis, in referring to “the first genocide of the 20th century,” was quoting a 2001 common declaration by Pope John Paul II and Catholicos Karekin II, head of the Armenian Apostolic Church, who was also present at Sunday’s Mass, along with Armenian President Serzh Sargsyan.

Pope Francis went further than the 2001 declaration, calling the killing of Armenians one of “three massive and unprecedented tragedies” in the 20th century. “The remaining two were perpetrated by Nazism and Stalinism,” he said. The latter reference was to the 1932-33 man-made famine in Ukraine, part of Joseph Stalin’s effort to collectivize Soviet agriculture, which killed as many as 7.5 million people.

The pope also spoke of the 1915 killings in connection to recent attacks on Christians, with an impassioned reference to “so many of our defenseless brothers and sisters who, on account of their faith in Christ or their ethnic origin, are publicly and ruthlessly put to death—decapitated, crucified, burned alive—or forced to leave their homeland.”

The pope has become increasingly vocal about the persecution of Christians around the world, especially in Muslim-majority countries. He has called on Muslim leaders to denounce the actions of Islamic State militants in Syria and Iraq. At a Good Friday ceremony on April 3, he deplored the world’s “complicit silence” about such persecution, including the previous day’s killings of nearly 150—many of them Christians—by a Somali insurgent group in Kenya.

As he has campaigned on behalf of persecuted Christians, Pope Francis has ardently promoted better relations between the Catholic Church and the Muslim world. He has written that “authentic Islam and the proper reading of the Quran are opposed to every form of violence.” On a May visit to Israel, he made a gesture of solidarity with Palestinians by stopping to pray at the controversial Israeli separation wall on the West Bank. He has publicly prayed with Muslims at the Vatican and in an Istanbul mosque.

Sunday’s Mass commemorated the centenary of what Armenians call the “Metz Yeghern,” a term that Vatican translators rendered as “Great Evil.” It was also the occasion for Pope Francis to proclaim St. Gregory of Narek a “doctor of the church,” honoring the 10th-century Armenian monk for his contributions to theology.

The pope also called for reconciliation between Turkey and Armenia, but his words are likely to raise tensions between the Vatican and Ankara.

Pope Francis had referred to the killing as a genocide before his election as pope, but had lately treated the issue more delicately.

Speaking to reporters at the end of a November trip to Turkey, the pope praised a statement made last April by Turkish leader Recep Tayyip Erdogan—then prime minister and now president since August—that offered “condolences” to descendants of the Armenian dead and expressed hope for “compassion and mutually humane attitudes towards one another.”

Mr. Erdogan has repeatedly called for a joint historical commission to establish a definitive record of the events, seeking to settle a century of mutual recriminations between Turks and Armenians.

But the Turkish president’s rhetoric has recently shifted, with Mr. Erdogan accusing the Armenian diaspora and Western leaders of fomenting enmity between the two peoples with genocide accusations.

As the 1915 anniversary nears, the geopolitics of the massacres are being played out in Washington and capitals of nations where the Armenian diaspora have made their homes.

In a separate written message to Armenians released by the Vatican on Sunday, the pope appeared to suggest that other leaders should join him in adopting the language of genocide: “All who are heads of state and of international organizations are called to oppose such crimes with a firm sense of duty, without ceding to ambiguity or compromise.”

A group of 40 members of Congress introduced a resolution to formally recognize the Armenian genocide in March, a move likely to strain U.S.-Turkish relations. Rep. Adam Schiff (D., Calif.), lead sponsor of the resolution, praised the pope’s remarks, saying he hoped they would “inspire our President and Congress to demonstrate a like commitment to speaking the truth about the Armenian genocide and to renounce Turkey’s campaign of concealment and denial.”

President Barack Obama pledged during his 2008 campaign that he would formally recognize the genocide though he hasn’t followed through. In remarks last year, Mr. Obama called the killings “one of the worst atrocities of the 20th century” without referring to them as genocide.

Armenian President Sargsyan said the pope’s statement was a “significant result” in the fight for defining the killings by their real name. A Turkish official said Sunday that Armenians “have closed all channels” for reconciliation and taken a hostile stance, despite the government’s efforts to set aside a policy of denial and “make up for its past faults as it presses ahead.”

The Armenian Patriarchate in Istanbul couldn’t be reached for a comment on Sunday. Members of Turkey’s Armenian community have been traditionally cautious in their public statements, out of sensitivity to relations with Turkish officials.

“This is the dilemma the Armenian community faces in Turkey. I believe everyone feels happy about this recognition of the genocide by this important religious institution, but they will not be able to express that,” said Rober Koptas, an Armenian publisher and the former editor in chief of Turkey’s Armenian newspaper, Agos, in Istanbul.

“I wish we didn’t need these types of foreign statements but instead got recognition and apology from Turkish authorities,” he said.