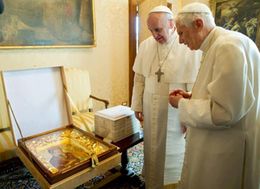 Three days after Pope Francis received a Marian icon as a gift from Patriarch Kirill, the head of the Russian Orthodox Church, the Pope gave the icon as a gift to Pope Emeritus Benedict.

Pope Francis told his predecessor that when he had received the icon, and been told that it was an image of “Our Lady of Humility, “I immediately thought of you.”

When informed that his gift to Pope Francis had quickly been passed along to Pope-emeritus Benedict, Metropolitan Hilarion said that he was “very pleased and touched.”