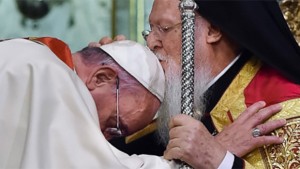 By Andrew Estocin in The Sounding

Orthodox Christians around the world were recently watching as Pope Francis visited The Ecumenical Patriarchate for the Feast of St. Andrew on November 30, 2014.  The same Pope of Rome who washed the feet of an Orthodox Christian in 2013 stood out again for his humility by asking Ecumenical Patriarch Bartholomew for his blessing.   The resulting photo is a loving reminder of the true meaning of leadership and the historical relationship between the Christian East and West.   While many serious issues continue to separate both Churches, Orthodox Christians can learn much from Pope Francis who has consistently voiced a profound respect for the Orthodox Church.

However, if anyone has come to think of Pope Francis’ humility as the equivalent of timidity, they are certainly mistaken.  Pope Francis is a shepherd who knows how to shake up his flock, much as the first Apostles upset the ancient world.  He is also a spiritual father who knows the value of having difficult conversations, and such conversations are often needed in the life of the Church.

In a bold evangelical speech on December 22, 2014 that brings to mind the courage of St. John Chrysostom, Pope Francis sent tremors through the Christian world by speaking about 15 spiritual ailments that afflict the Church.  This speech is a reminder that the wisdom of the current Pope is very relevant to the condition of Orthodox Christianity today.  The 15 ailments that Pope Francis identified are ailments that afflict all of Orthodox Christianity in some form or another.  After all, the Church is a hospital and all of us are sinners – no exceptions.  Each of us can evaluate our lives and our role as leaders in light of these 15 ailments and begin a process of genuine renewal and service to others.  In this light, Pope Francis’ list is a Christmas gift that could not come at a better time.

Linked to below are Pope Francis’ 15 spiritual ailments that afflict the Church as recorded by the Vatican Information Service.  They are presented with the hope that they will challenge Orthodox Christians to grow as members of the Body of Christ and become better leaders.  Real spiritual growth is very difficult and Orthodox Christianity faces many challenges in the twenty-first century.

Reflecting on each of these 15 ailments represents a spiritual opportunity for the Church to better live its inheritance and flourish in its apostolic mission. Reading this list is certainly humbling, but also at the same time very much healing.  Somehow, I think that was the intention of Pope Francis all along.