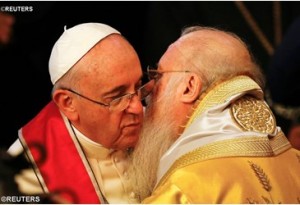 (Vatican Radio)  In an address upon conclusion of the Divine Liturgy celebrated by Ecumenical Patriarch Bartholomew I at the Orthodox Church of St. George in Istanbul, Pope Francis said “the one thing that the Catholic Church desires and that I seek as Bishop of Rome…is communion with the Orthodox Churches.”

Below, please find the complete text of the Holy Father’s address:

When I was the Archbishop of Buenos Aires, I often took part in the celebration of the Divine Liturgy of the Orthodox communities there.  Today, the Lord has given me the singular grace to be present in this Patriarchal Church of Saint George for the celebration of the Feast of the holy Apostle Andrew, the first-called, the brother of Saint Peter, and the Patron Saint of the Ecumenical Patriarchate.

Meeting each other, seeing each other face to face, exchanging the embrace of peace, and praying for each other, are all essential aspects of our journey towards the restoration of full communion.  All of this precedes and always accompanies that other essential aspect of this journey, namely, theological dialogue.  An authentic dialogue is, in every case, an encounter between persons with a name, a face, a past, and not merely a meeting of ideas.

This is especially true for us Christians, because for us the truth is the person of Jesus Christ.  The example of Saint Andrew, who with another disciple accepted the invitation of the Divine Master, “Come and see”, and “stayed with him that day” (Jn 1:39), shows us plainly that the Christian life is a personal experience, a transforming encounter with the One who loves us and who wants to save us.  In addition, the Christian message is spread thanks to men and women who are in love with Christ, and cannot help but pass on the joy of being loved and saved.  Here again, the example of the apostle Andrew is instructive.  After following Jesus to his home and spending time with him, Andrew “first found his brother Simon, and said to him, ‘We have found the Messiah’ (which means Christ).  He brought him to Jesus” (Jn 1:40-42).  It is clear, therefore, that not even dialogue among Christians can prescind from this logic of personal encounter.

It is not by chance that the path of reconciliation and peace between Catholics and Orthodox was, in some way, ushered in by an encounter, by an embrace between our venerable predecessors, Ecumenical Patriarch Athenagoras and Pope Paul VI, which took place fifty years ago in Jerusalem.  Your Holiness and I wished to commemorate that moment when we met recently in the same city where our Lord Jesus Christ died and rose.

By happy coincidence, my visit falls a few days after the fiftieth anniversary of the promulgation of Unitatis Redintegratio, the Second Vatican Council’s Decree on Christian Unity.  This is a fundamental document which opened new avenues for encounter between Catholics and their brothers and sisters of other Churches and ecclesial communities.

In particular, in that Decree the Catholic Church acknowledges that the Orthodox Churches “possess true sacraments, above all – by apostolic succession – the priesthood and the Eucharist, whereby they are still joined to us in closest intimacy” (15).  The Decree goes on to state that in order to guard faithfully the fullness of the Christian tradition and to bring to fulfilment the reconciliation of Eastern and Western Christians, it is of the greatest importance  to preserve and support the rich patrimony of the Eastern Churches.  This regards not only their liturgical and spiritual traditions, but also their canonical disciplines, sanctioned as they are by the Fathers and by Councils, which regulate the lives of these Churches (cf. 15-16).

I believe that it is important to reaffirm respect for this principle as an essential condition, accepted by both, for the restoration of full communion, which does not signify the submission of one to the other, or assimilation.   Rather, it means welcoming all the gifts that God has given to each, thus demonstrating to the entire world the great mystery of salvation accomplished by Christ the Lord through the Holy Spirit.  I want to assure each one of you here that, to reach the desired goal of full unity, the Catholic Church does not intend to impose any conditions except that of the shared profession of faith.  Further, I would add that we are ready to seek together, in light of Scriptural teaching and the experience of the first millennium, the ways in which we can guarantee the needed unity of the Church in the present circumstances.  The one thing that the Catholic Church desires, and that I seek as Bishop of Rome, “the Church which presides in charity”, is communion with the Orthodox Churches.  Such communion will always be the fruit of that love which “has been poured into our hearts through the Holy Spirit who has been given to us” (cf. Rom 5:5), a fraternal love which expresses the spiritual and transcendent bond which unites us as disciples of the Lord.

In today’s world, voices are being raised which we cannot ignore and which implore our Churches to live deeply our identity as disciples of the Lord Jesus Christ.

The first of these voices is that of the poor.  In the world, there are too many women and men who suffer from severe malnutrition, growing unemployment, the rising numbers of unemployed youth, and from increasing social exclusion.  These can give rise to criminal activity and even the recruitment of terrorists.  We cannot remain indifferent before the cries of our brothers and sisters.  These ask of us not only material assistance – needed in so many circumstances – but above all, our help to defend their dignity as human persons, so that they can find the spiritual energy to become once again protagonists in their own lives.  They ask us to fight, in the light of the Gospel, the structural causes of poverty: inequality, the shortage of dignified work and housing, and the denial of their rights as members of society and as workers.  As Christians we are called together to eliminate that globalization of indifference which today seems to reign supreme, while building a new civilization of love and solidarity.

A second plea comes from the victims of the conflicts in so many parts of our world.  We hear this resoundingly here, because some neighbouring countries are scarred by an inhumane and brutal war.  With profound pain, I think of the many victims of the many victims of the inhuman and senseless attack that recently  struck the Muslim faithful as they prayed in the mosque of Kano in Nigeria.  Taking away the peace of a people, committing every act of violence – or consenting to such acts – especially when directed against the weakest and defenceless, is a profoundly grave sin against God, since it means showing contempt for the image of God which is in man.  The cry of the victims of conflict urges us to move with haste along the path of reconciliation and communion between Catholics and Orthodox.  Indeed, how can we credibly proclaim the Gospel of peace which comes from Christ, if there continues to be rivalry and disagreement between us (cf. Paul VI, Evangelii Nuntiandi, 77)?

A third cry which challenges us is that of young people.  Today, tragically, there are many young men and women who live without hope, overcome by mistrust and resignation.  Many of the young, influenced by the prevailing culture, seek happiness solely in possessing material things and in satisfying their fleeting emotions.  New generations will never be able to acquire true wisdom and keep hope alive unless we are able to esteem and transmit the true humanism which comes from the Gospel and from the Church’s age-old experience.  It is precisely the young who today implore us to make progress towards full communion.  I think for example of the many Orthodox, Catholic and Protestant youth who come together at meetings organized by the Taizé community.  They do this not because they ignore the differences which still separate us, but because they are able to see beyond them; they are able to see beyond them, to embrace what is essential and what already unites us which is much holiness.

Dear brother, dearest brother, we are already on the way, on the path towards full communion and already we can experience eloquent signs of an authentic, albeit incomplete union.  This offers us reassurance and encourages us to continue on this journey.  We are certain that along this journey we are helped by the intercession of the Apostle Andrew and his brother Peter, held by tradition to be the founders of the Churches of Constantinople and of Rome.  We ask God for the great gift of full unity, and the ability to accept it in our lives.  Let us never forget to pray for one another.