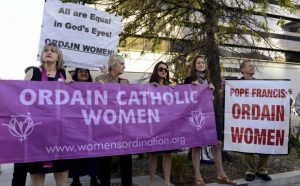 Reuters
Demonstrators call on the Catholic Church to ordain women priests during Pope Francis’ visit to the Cathedral of St Matthew the Apostle in Washington during his visit to the US last year.

The Roman Catholic Church took the first tentative steps towards women’s ordination today when Pope Francis announced a new commission to look at the possibility of women deacons.

However, there are concerns among campaigners for women priests in the Catholic Church that women deacons will be ordained in an attempt to fob them off from expecting any further moves towards equality.

In an indication that the Pope is serious about moving forward on this issue, half of the commission’s members are themselves women, all highly regarded as intellectuals and academics from institutions around the world.

Pope Francis indicated in May that he intended to set up an official commission to study the diaconate of women, “especially with regard to the first ages of the Church.”

The Commission for the Study of the Diaconate of Women will be headed by the Archbishop Luis Ferrer, Secretary of the Congregation for the Doctrine of the Faith and, like Pope Francis, a Jesuit.

Deacons are the first of the three holy orders of deacon, priest and bishop. They can take weddings and funerals but may not say Mass. Male deacons can also marry, unlike most Catholic priests.

Women priests in the Catholic Church would remove one of the main barriers to Anglican and Catholic unity, but would put a serious new barrier in place to unity between the Catholic and Orthodox churches.

The Vatican did make clear today that the Pope was not currently considering the issue of women priests.

Pat Brown of Catholic Women’s Ordination told Christian Today: “This is good news. We see it as a step towards the ordination of women into the priesthood. We hope the commission will consider women on an equal footing with me in the diaconate. We do not see it as something we are just going to settle for. But obviously having women at the altar is going to help us. We will pray about it and hope it will be a good thing.”