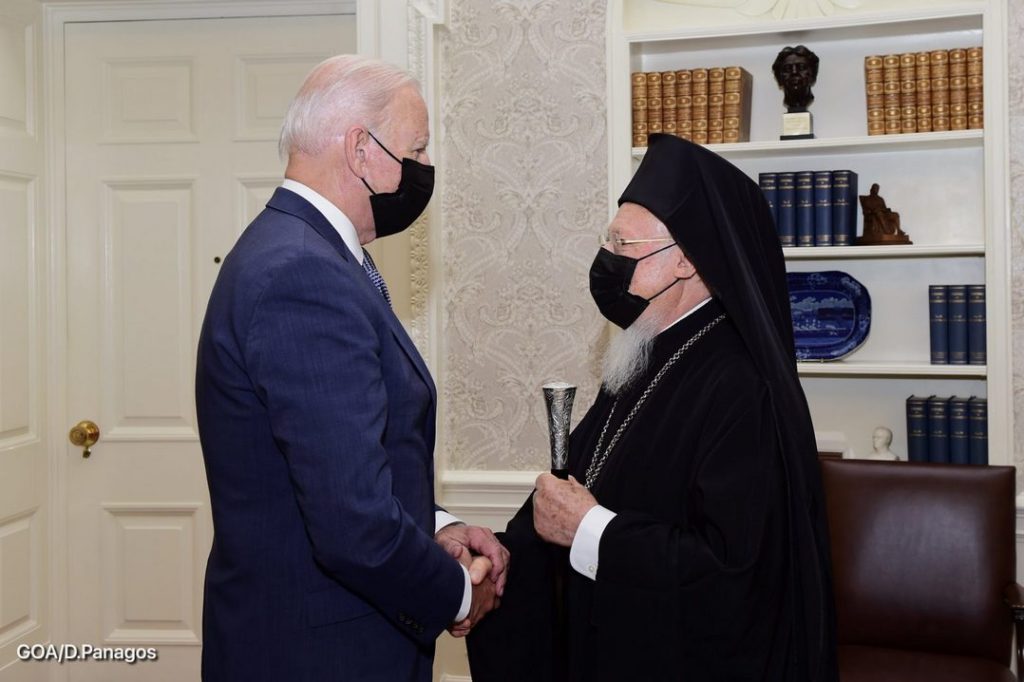 President of the United States Joe Biden welcomed His All-Holiness to the White House for a meeting on October 25, 2021. (Photo: GOA/D. Panagos)

BOSTON – President Joseph Biden called His All-Holiness Ecumenical Patriarch Bartholomew on Monday night, November 8, to personally check in on the development and progress of his health and to express once again his interest and America’s support in the affairs of the Ecumenical Patriarchate.

Mr. Biden thanked the Patriarch for his recent visit to the White House and for their one-hour meeting and conversation, which the President kindly said could have “lasted a year!”

President Biden also spoke about his recent visit to the Vatican where he met with Pope Francis and that he was “pleased to see the very fraternal relations between the two religious leaders.” He also spoke to the Patriarch about Giannis Antetokounmpo who has become an Orthodox Christian.

Specifically, an announcement of the Ecumenical Patriarchate stated the following: “On the night of Monday, November 8, 2021, the first day of the return of His All-Holiness Ecumenical Patriarch Bartholomew from America, His Excellency the President of the USA, Mr. J. Biden called to inquire about his health and to be informed about return journey to Constantinople. When the Patriarch thanked him for the recent meeting they had at the White House on October 25, which lasted more than an hour, the President generously replied that it could have lasted a year! He also said that after their meeting, he went to the Vatican and had a meeting with the Pope, and was pleased to see the very fraternal relations between the two religious leaders. Furthermore, His Excellency reported to His All-Holiness about his meeting with the well-known athlete Mr. Giannis Antetokounmpo, who has become Orthodox.

Finally, His Excellency the President told the Patriarch not to hesitate to contact him on any matter when the need arises.”

It is noted that the Patriarch arrived in Constantinople on the morning of Monday, November 8, on a Turkish Airlines flight, accompanied by the Greek-American doctor Georgios Syros, the Third Deacon Kallinikos and his aide Panagiotis Grafiadellis.

He was met at the airport by the Great Chancellor Theodoros, as the Patriarchal Vicar, Metropolitan Apostolos Geron of Derkon, was liturgizing at the celebrating Church of Pammegiston Taxiarchon of Sosthenia of Constantinople. When the Patriarch arrived, he went to his home to rest. On Tuesday, he went to the Phanar, where he was received by the Patriarchal Court and the Staff and had meetings with his close associates. He also had a meeting with Dr. Syros, and was also attended by his personal doctor in Constantinople, Jean-Claude Cayuca, who is Orthodox. It was found once again that everything is going well with the health of His All-Holiness. Dr. Syros was expected to return to New York on Wednesday, November 10.

The Patriarch has already recommenced his regular schedule. On November 9, he received visitors, including the Ambassador of Jordan, while in the evening he had planned to visit the celebrating Archbishop Nektarios of Anthidonos, Patriarchal Vicar of the Patriarchate of Jerusalem in Constantinople, on the island of Halki. On Friday, the entire Hierarchy of the Ecumenical Throne in Turkey will visit the Patriarch in the Phanar to pay their respects and wish him well.