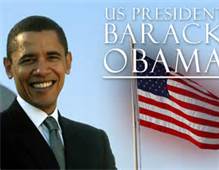 NEW YORK – The Greek Orthodox Archdiocese of America is pleased to announce the receipt of a very significant message and greeting from the President of the United States, Barack Obama, and the First Lady Michelle Obama, on the occasion of Orthodox Pascha (Easter). In his message, the President makes reference to the ordeals facing Orthodox Christians in the Middle East and North Africa and reaffirms his commitment to religious freedom as a universal human right.

The Statement of the President follows:

THE WHITE HOUSE
Office of the Press Secretary
FOR IMMEDIATE RELEASE
May 4, 2013

Statement by the President on the Occasion of Orthodox Easter

This weekend, Michelle and I extend our best wishes to members of the Orthodox Christian community here in America and around the world as they observe Holy Friday and the Feast of the Resurrection.

For millions of Orthodox Christians, this is a joyful time. But it’s also a reminder of the sacrifice Christ made so that we might have eternal life. His decision to choose love in the face of hate; hope in the face of despair is an example we should always strive to follow. But it’s especially important to remember this year, as members of the Orthodox community have been confronted with persecution and violence, particularly in the Middle East and North Africa. For centuries, the region and the world has been enriched by the contributions of Orthodox communities in countries like Egypt, Lebanon, Syria, and Iraq. As a nation, we reaffirm our commitment to protecting universal human rights including the freedom of religion. And in this season of hope and restoration, we celebrate the transformational power of sacrificial love.