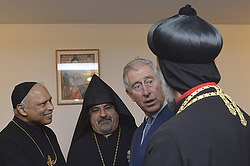 The Prince greets clergy at the Syriac Orthodox church in West London in December.

The Prince of Wales this week followed up his impassioned plea for religious freedom at the 4 November launch of an Aid to the Church in the Need report on persecution, with a visit to St Yeghichè’s Armenian church in South Kensington, London.

April next year marks the hundredth anniversary of the beginning of the genocide by the Ottoman Government against the Armenian population, in which 1.5 million were killed.

Some of those who escaped fled to Syria, and the visit by the Prince of Wales comes as the descendants of those who fled the genocide face a new persecution at the hands of contemporary Islamists in Syria and Iraq.

The prince was speaking on Wednesday to a 1,000-strong congregation that included Bishop Vahan Hovhanessian, Primate of the Armenian Church in the UK, Dr Armen Sarkissian, the Armenian ambassador, the Armenian Archbishop of Iraq Avak Asadourian.

He said: “Whilst it is a joy for me to be in St Yeghichè this morning it is the most soul-destroying tragedy that the Armenian Church is facing such indescribable persecution in the Middle East, in countries where Armenian Christians have long lived peacefully with their neighbours.

“It is, literally, heartbreaking to learn of the attacks on Christians and on the churches where they gather, such as the mindless, brutal destruction of the Armenian church in Deir el Zour in late September.”

The church in Deir el Zour, eastern Syria, was dedicated to the Armenian genocide victims. All of its archives, dating back to 1841 and containing thousands of documents on the Armenian Holocaust, were burned to ashes. The bones of hundreds of genocide victims were carted from the church’s crypt and thrown into the street.

“Your Grace,” Prince Charles continued, addressing Bishop Vahan, “I should like to thank you for standing before us today to tell us about the continued sufferings of the Armenian Church in Iraq. I should also like to say that I greatly admire the courage and faith of your flock who are an example to us all of faith, quite literally, under such grotesque and barbarous assault.”

The video address for Aid to the Church in Need, which you can watch by clicking on the video above or here.

During the service, Archbishop Avak Asadourian, spoke of the problems facing Armenian Christians in the region from his own experiences. “Due to assaults Iraqi Christians are leaving the country of their forefathers. In 1980 there were 1.5 million, this is now down to 400,000 due to the encroachment of Islamic State,” he said.

The Armenian Mets Yeghern (“great crime”) – the systematic eradication of 1.5 million Armenians by Ottoman Turks between 1915 and 1922, is recognised as a genocide by the Vatican, the US, France, Germany, Italy, Russia, Canada and many other Western countries, but not by the United Kingdom.

The Diocese of the Armenian Church of the UK and Ireland has raised £15,000 to help the Armenians of Syria during the past year, and is continuing its fundraising efforts.

St Yeghichè (formerly known as St Peter’s) is a former Anglican church which was closed in 1973 and taken over by the Armenian Orthodox Church in 1998.