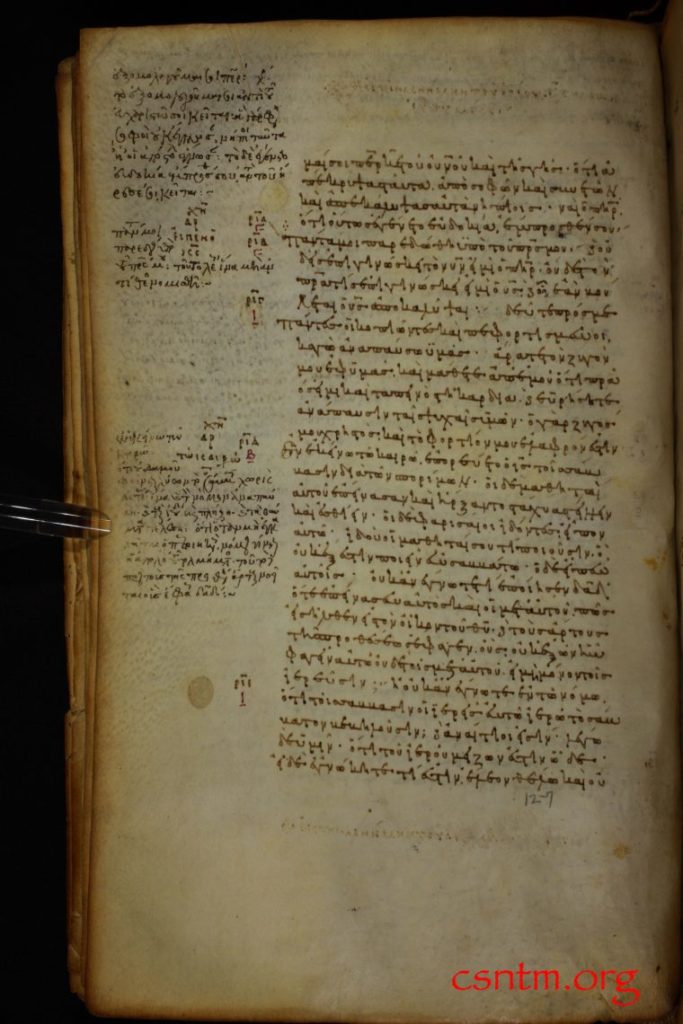 One of the pages from the rare 9th century New Testament manuscript known as Codex 1424 which was returned to the Panagia Eikosifoinissa Monastery in Drama, Greece. Photo: Public domain

NEW YORK – Earlier this year, The National Herald reported on the Archons of the Ecumenical Patriarchate calling for the return of 8 manuscripts stolen from the Panagia Eikosifoinissa Monastery in Northern Greece which were still held in collections in U.S. institutions even after the December 3, 2016 return of the rare 9th century New Testament manuscript to the monastery by the Lutheran School of Theology in Chicago (LSTC).

At the end of March 1917, during the First World War, the Bulgarian chieftain Panitsas with his men and Vladimir Sis, a self-proclaimed archaeologist, invaded the Monastery of Eikosifoinissa in the Drama area and after they destroyed the monastery and looted the library, including 430 valuable centuries-old manuscripts, fled the scene.

In his report to the Greek Foreign Ministry on October 28, 1918, the abbot of Eikosifoinissa Neophytos wrote: “Holy Week, the Week of the Passion of our Lord Jesus Christ and the Monks… After an hour’s beating, we saw that others set fire in the backyard between St. Barbara and the catholic Church courtyard, and in addition to the printed books of the Church and the garments of the Monks in the sanctuary, then we think that the stolen library and the other various sacred vestments were burned there… and the stolen items from the library were various manuscripts made of vellum and papyrus from the vestry, in sacred vestments of Byzantine design, gold and silver objects of immense wealth, and in gold, sigils and ownership titles and other objects of ancient design have always been loaded onto 18 mules and transferred to Drama. The historical value of these no one will be able to describe…”

In 2016, the Ecumenical Patriarchate, through its representatives in the United States contacted LSTC, requested the return, and the school complied. When the return of the manuscript was announced in November 2016, His Eminence Archbishop Demetrios said, “Nearly a century ago, our faithful lost an integral part of the treasures of our Orthodox faith and tradition when the library of the Monastery of Panagia Eikosifoinissa (Kosinitza Monastery) was ransacked and many manuscripts, Codex 1424 included, were taken. We hope that other collections in the United States which also possess manuscripts originating from the Monastery of Panagia Eikosifoinissa will follow the fine example set by LSTC and voluntarily return the manuscripts to their rightful home. Our gratitude to LSTC is enormous indeed for adhering to the original spiritual intent and moral mandate of the manuscript itself.”

The President of LSTC, James Nieman, said, “For nearly a century, we have been blessed to be the stewards of this remarkable document, and today we are blessed again by the opportunity to return it to our Greek Orthodox friends and strengthen the bond we have together in Christ Jesus.”

Of the Patriarchate’s concerns, Hotchkiss said, “We are grateful that the Patriarchate brought its concerns to our attention, and we have been in communication with its representatives for more than two years. In service of our teaching and research mission, we seek to provide the global academic community with continuing access to works of scholarly significance from around the world to advance learning, knowledge, and understanding.”

He continued, “Since this matter was brought to our attention in late 2015, we have carefully reviewed all of the information provided by the Patriarchate and also conducted our own research on the provenance of the manuscripts. Based on the information available to us, we have found no basis to conclude that the manuscripts in our possession were looted during World War I, or otherwise improperly removed from the possession of the Patriarchate. We will continue to give prompt and meaningful consideration to any additional research and documentation provided by the Patriarchate, and we have encouraged its representatives to contact us with any new information.”

At press time, Duke University had not yet responded to TNH’s request for comment.

The returned manuscript, known among biblical scholars as Codex 1424, was one of many manuscripts taken in 1917 from the Monastery of Panagia Eikosifoinissa, in the Paggaion mountain range near the city of Drama, in Greece, during World War I. It found its way to a European book dealer and was purchased in 1920 by Levi Franklin Gruber, who later became president of Chicago Lutheran Theological Seminary, one of LSTC’s predecessor schools.

Gruber bequeathed the codex to his widow, and the seminary later received his entire rare book collection from her.

Greek manuscripts that contain the entire New Testament are rare. According to biblical scholar Kurt Aland, there are only 60 such manuscripts in world collections.

The manuscript was copied by a monk named Savas, and other monks three centuries later added excerpts from St. John Chrysostom, St. Basil the Great, St. Gregory of Nyssa, and others as commentaries in the margins of the pages.

The Center for the Study of New Testament Manuscripts has photographed the manuscript. It may be viewed at www.csntm.org/manuscript/View/GA_1424?filter=1.

Ralph W. Klein, curator of the LSTC rare book collection, said, “Manuscripts like Codex 1424 enable New Testament scholars to construct a definitive text of the Greek New Testament since none of the original texts has survived and ancient manuscripts contain thousands of variant readings. We are indebted to our ancestors in the faith who took such care that the Sacred Scriptures were preserved for posterity. Codex 1424 represents the Byzantine family of manuscripts that became the backbone for the Textus Receptus in the 16th century and was the Greek edition used by the translators of the King James Version.”