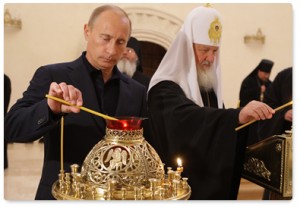 MOSCOW, July 25 (RIA Novosti) – Russian President Vladimir Putin on Thursday praised the role of Orthodox Christianity in the country’s history and congratulated the heads of the world’s Orthodox churches on the 1025th anniversary of the Christianization of Kievan Rus, a medieval state comprising parts of modern-day Russia, Ukraine and Belarus.

“The adoption of Christianity became a turning point in the fate of our fatherland, made it an inseparable part of the Christian civilization and helped it turn into one of the largest world powers,” Putin said in a message addressed to participants of a commemorative celebration on Red Square, the Kremlin reported.

“It is Orthodoxy that gave Russia a powerful impetus for the development and rise of culture and education,” the message says.

Putin also praised the Russian Orthodox Church’s role in developing a constructive dialogue with other Orthodox churches as well as international collaboration.

“The foundation of our national, spiritual and cultural life was laid 1025 years ago,” he said. “Our ancestors adopted the Christian faith and, together with it, a system of values and morals … that no historical upheavals were able to destroy.”

Despite the fact that Russians, Ukrainians and Belarusians live in different countries today, the patriarch said, their spiritual foundation remains common and unites the Slavic nations.