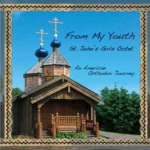 SAN DIEGO, CA [OCA] Two historic recordings of American Orthodox liturgical singing, made in the early 1970s by the Saint John’s Girls Octet of Warren, OH, have been re-released on a single CD, titled “From My Youth: An American Orthodox Journey,” according to Musica Russica, a leading publisher of Orthodox sheet music and CDs.

The two re-mastered vinyl LPs, “From My Youth” and “New Valaamo,” include 25 tracks and feature a number of arrangements and compositions by American composers, written in English at a time when the use of the English language was beginning to spread among Orthodox parishes. Included are works by Antony Bassoline, Theodore Heckman, William Kraftician, Kenneth Kovach, John Matusiak, John Platko, and Ratsko Trbuhovich, among others.

The Saint John’s Girls Octet was established in the late 1960s at Warren’s Saint John the Baptist Church, where Father Thomas Hopko was the priest at the time. Under their founding music director, Janet (née Augusta) Morosan, the Octet was invited to give concerts and sing services in Ohio, as well as Pennsylvania, New York, New Jersey, Connecticut, and West Virginia. In the summer of 1973, they were invited by His Grace, Bishop Gregory (Afonsky), the newly elected Bishop of Sitka and Alaska, to accompany him on his tour of his far-flung diocese. The first LP, “From My Youth,” was recorded as a fund-raiser for their trip to Alaska.

Landing in Anchorage with only enough money for a round-trip ticket, the seven young women who made the trip were subsequently funded by the generosity of the Alaskan Orthodox faithful, spending six weeks traveling through the Kenai Peninsula, Kodiak, Sitka, Juneau, the villages of Napaskiak and Kwethluk on the Kuskokwim River, Unalaska, and Pribiloff Islands of St. George and St. Paul on the Aleutian Chain. Upon returning to the “Lower 48,” they recorded a second LP, “New Valaamo,” under the leadership of Janet (née Maksimoff) Mihalick, who had taken over as music director from Janet Augusta.

The CD was launched in connection with the 16th All-American Council of the Orthodox Church in America, which met in Seattle, WA October 31 through November 4, 2011. While paying tribute to the youthful, missionary-minded spirit of Saint John’s Girls Octet, the newly released CD aims to support the ongoing missionary work in Alaska, in that a portion of the proceeds will be donated to Saint Herman’s Seminary, Kodiak, AK.

The CD retails for $15.98, and is available at www.musicarussica.com. For wholesale and bookstore discounts, please contact Musica Russica at 1-800-326-3132.