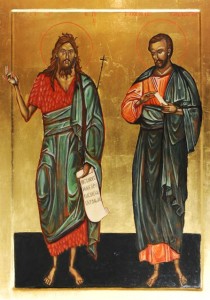 George Karcazes, Vice President and George Matsoukas, Executive Director of Orthodox Christian Laity (OCL) had the privilege of attending the recently-held conference co-sponsored by the  Orthodox Theological Society in America (OTSA ) and the Orthodox Christian Studies Center of Fordham University held at Fordham University School of Law, Lincoln Center Campus, on  Friday, June 26 and Saturday, June 27, 2015. On Friday evening, the Florovsky Lecture on “The Decisive Importance of Councils in the Life of the Church” was delivered by His Eminence, Metropolitan Kallistos Ware at the Leon Lowenstein Center of the Lincoln Center Campus, and was well attended.

OTSA was organized in 1966 with the help of the Standing Conference of Canonical Orthodox Bishops in the Americas as a way to promote Orthodox theology, fellowship and cooperation among Orthodox Christians. It also serves as a means to coordinate the work of Orthodox theologians in the Americas. The Orthodox Christian Studies Center of Fordham University was established in 2007 for the purpose of fostering intellectual inquiry by supporting scholarship and teaching that is critical to the ecclesial community, public discourse and the promotion of Christian Unity. The center serves as a focus of curricular, research and outreach activities related to the interdisciplinary study of the Orthodox Christian tradition.

Theologians from India, Greece, France, England, Canada and at least 15 academic Institutions in the United States participated by presenting papers or reacting to papers as panelists.   Topics presented at the conference included: Autocephaly and Diaspora; the Contribution of the Orthodox Church to the Realization of Justice, Freedom, Brotherhood and Love Among Peoples;  Ecumenical Relations; and Canonical Impediments to Marriage.  These topics are part of the Agenda of the Great and Holy Council that will be convened in May, 2016. Short papers were presented on the topic of Archives and Autocephaly in the OCA, and Fasting Regulations in the 21st Century: A Challenge for the Great and Holy Synod of 2016.

Participants participated in Vespers celebrated by Father James Kordaris at St George Greek Orthodox Church on West 54th Street at the conclusion of the Conference on Saturday evening.

OCL has organized 27 Annual Meeting Programs all related to promoting Orthodox Christian Unity in the United States.  Hundreds of presenters of different backgrounds have been involved in these programs. We have used various formats to present information. Programs have been presented throughout the nation. OCL has also been the guest and received the hospitality of various monastic communities as well as the St Symeon the New Theologian Orthodox Renewal Center founded by Father Eusebius Stephanou, presently at Miramar Beach, Florida. Through its Executive Director and Board members, OCL has also participated in many National Assemblies of Clergy and Laity of all jurisdictions.  The program presented at Fordham this past weekend was one of the most dynamic and relevant events that OCL has attended.  The entire Orthodox Christian world waits the convening of the Great and Holy Council. The fact that it will be convened, is a turning point in the life of modern Orthodox Christianity.   We hope that the lecture of Metropolitan Kallistos will be made available to the faithful.   We hope that the academic presentations will be posted on the Center’s web site.  Many of the faithful will want to read these presentations so that they can understand the issues and agenda that the bishops at the Council will develop.  We need to pray that the Holy Spirit works within the Council participants.  We hope that provisions are made for clergy, laity and other interested observers.

It is our sincere hope that the OTSA, the Orthodox Christian Studies Center and Orthodox theologians world-wide understand that they need to expand their missions and become active leaders in presenting and directing public discourse on the issues related to Agenda of the Council and Unity and other issues related to Orthodox Christianity.  The Church requires the gifts of all of its members, so that she can fulfill the Great Commission of Christ and be faithful to her mission for our time and place.   Orthodox Christian theologians committed to Christ and excellence and truth need to take a leadership role.