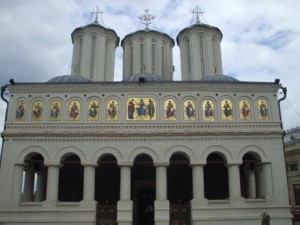 Patriarchate of the Romanian Orthodox Church in Bucharest, Romania

Disputes over the funding of Romania’s Orthodox Church and religious organizations in general has piqued the interest of Britain’s National Secular Society. The idea of a ‘church tax’ in Romania, proposed by Romanian Green Party MP Remus Cernea, has provoked angry responses from a number of public figures, including former MEP and football boss George Becali.

The church tax proposed would be similar to the system used in Germany whereby citizens have the option to donate part of the tax they pay to religious and/or non-religious organizations. The reformed system would save EUR 70 million a year, according to Remus Cernea. Currently, religious organizations “are funded at the discretion of parliament, with most funding going to the Romanian Orthodox Church,” according to the British Secular Society.

“We feel that the majority of Romanian citizens would approve the proposed reform. But there have been some very negative, very undemocratic replies from many politicians,” said Cezar Maroti, president of the Romanian Humanis Association (RHA), quoted by the British Secular Society.

Highlighted in the Secular Society report are Constanta city mayor Radu Mazare, who threatened to break Remus Cernea’s legs unless he apologized to the Romanian Church, and George Becali, who heaped his typical line in insults on Cernea.

Becali reportedly called Remus Cernea a “satanist” and an “animal,” among other things, and recommended that he should be imprisoned or committed to a mental asylum for his views. After the European Commission’s rebukes over a little tinkering with the constitution for political gain last summer in Romania, it seems a long shot to believe that the European authorities would be happy with imprisonment for lack of fealty to the church.

Remus Cernea said that his proposal will help religious groups, by supplying them with “predictable, stable and quite substantial funding.” Meanwhile, the Romanian Orthodox Church has described the proposal as “unrealistic and inadequate.”

Founded in 1866, the British National Secular Society campaigns from a non-religious point of view for the separation of religion and state. The organization promotes secularism “as the best means to create a society in which people of all religions or none can live together fairly and cohesively.” The society judges the separation of religion from the state’s powers as a vital part of ensuring equality among citizens.

Find out more and read the report on the British National Secular Society website.

Over 20 NGOs have recently asked the Romanian Parliament to put an end to financing religious groups to the tune of EUR 540 million every year. The funds – around 0.4 percent of the country’s GDP – should be directed to education, research and health. The 23 NGOs which signed the letter to Parliament reminded of the debt on the drug market, of 0.3 percent of the GDP. “In a secular state like Romania it is not normal to have hundreds of millions of euros taken away from state, local and central authorities and from the country’s real needs, to the benefit of religious groups.” These are private organizations and should be self-financed using the believers’ volunteer contributions,” the NGOs wrote in the letter.

In Romania,  for a religious group to be recognized, it needs to be legally set up, be active in Romania for at least 12 years and its members – Romanian citizens – need to be at least 0.1 percent of Romania’s population according to the latest census. Other religious associations exist in Romania, but are not recognized by the state. The 2011 census showed that out of Romania’s 19 million inhabitants, 16 million were Orthodox. Some 860,000 were Roman – Catholics, 160,000 were Greek – Catholics, 600,000 were reformed, 370,000 were Pentecostals, and 350,000 had other religions, while over 20,000 said they did not believe in God, and over 80,000 did not declare any religion.