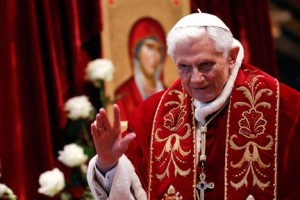 On the evening of Sept. 12, 2006, my wife and I were dining in Cracow with Polish friends when an agitated Italian Vaticanista (pardon the redundancy in adjectives) called, demanding to know what I thought of “Zees crazee speech of zee pope about zee Muslims.” That was my first hint that the herd of independent minds in the world press was about to go ballistic on the subject of Benedict XVI’s Regensburg Lecture: a “gaffe”-bone on which the media continued to gnaw until the end of Benedict’s pontificate.

Eight years later, the Regensburg Lecture looks a lot different. Indeed, those who actually read it in 2006 understood that, far from making a “gaffe,” Benedict XVI was exploring with scholarly precision two key questions, the answers to which would profoundly influence the civil war raging within Islam—a war whose outcome will determine whether 21st-century Islam is safe for its own adherents and safe for the world.

The first question was about religious freedom: Could Muslims find, within their own spiritual and intellectual resources, Islamic arguments for religious tolerance (including tolerance of those who convert to other faiths)? That desirable development, the pope suggested, might lead over time (meaning centuries) to a more complete Islamic theory of religious freedom.

The second question was about the structuring of Islamic societies: Could Muslims find, again from within their own spiritual and intellectual resources, Islamic arguments for distinguishing between religious and political authority in a just state? That equally desirable development might make Muslim societies more humane in themselves and less dangerous to their neighbors, especially if it were linked to an emerging Islamic case for religious tolerance.

Pope Benedict went on to suggest that inter-religious dialogue between Catholics and Muslims might focus on these two linked questions. The Catholic Church, the pope freely conceded, had had its own struggles developing a Catholic case for religious freedom in a constitutionally-governed polity in which the Church played a key role in civil society, but not directly in governance. But Catholicism had finally done so: not by surrendering to secular political philosophy, but by using what it had learned from political modernity in order to reach back into its own tradition, rediscover elements of its thinking about faith, religion, and society that had gotten lost over time, and develop its teaching about the just society for the future.

Was such a process of retrieval-and-development possible in Islam? That was the Big Question posed by Benedict XVI in the Regensburg Lecture. It is a tragedy of historic proportions that the question was, first, misunderstood, and then ignored. The results of that misunderstanding and that ignorance—and a lot of other misunderstanding and ignorance—are now on grisly display throughout the Middle East: in the decimation of ancient Christian communities; in barbarities that have shocked a seemingly-unshockable West, like the crucifixion and beheading of Christians; in tottering states; in the shattered hopes that the 21st- century Middle East might recover from its various cultural and political illnesses and find a path to a more humane future.

Benedict XVI, I am sure, takes no pleasure in history’s vindication of his Regensburg Lecture. But his critics in 2006 might well examine their consciences about the opprobrium they heaped on him eight years ago. Admitting that they got it wrong in 2006 would be a useful first step in addressing their ignorance of the intra-Islamic civil war that gravely threatens peace in the 21st-century world.

As for the conversation about Islam’s future that Benedict XVI proposed, well, it now seems rather unlikely. But if it’s to take place, Christian leaders must prepare the way by naming, forthrightly, the pathologies of Islamism and jihadism; by ending their ahistorical apologies for 20th-century colonialism (lamely imitating the worst of western academic blather about the Arab Islamic world); and by stating publicly that, when confronted by bloody-minded fanatics like those responsible for the reign of terror that has beset Syria and Iraq this summer, armed force, deployed prudently and purposefully by those with the will and the means to defend innocents, is morally justified.

George Weigel is Distinguished Senior Fellow of Washington’s Ethics and Public Policy Center. His previous articles can be found here.