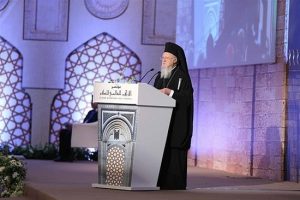 It is an honor to be invited to address this Conference on Global Peace organized by Al-Azhar and the Muslim Council of Elders. We wholeheartedly congratulate His Eminence Mr. Ahmad Al-Tayyeb, Grand Imam of Al-Azhar, for having the courage and vision to organize this crucial initiative in the promotion of peace by religions.

During the last two decades, humanity has experienced continuous terrorist attacks, which are the cause of death and hurt of thousands of people, and which are becoming the greatest threat and source of fear for contemporary societies. Since then, religions have been often suspected or openly accused for inspiring terrorism and violence. Our everyday life has become filled with horrible news about terrorist attacks in the name of religion.

At the same time, we notice the willingness and capacity in our world to promote dialogue instead of conflict. This is true, not only for political leaders and secular organisations, but also for religious leaders and institutions that have shown their readiness to engage into a dialogue of peace on a local and on an international level, in order to insure a pacific coexistence and collaboration between people.

How, then, after so many conferences, declarations and initiatives for peace, could we witness an increase of violence, instead of noticing a progress in peace making? How can the world community justify the last terrorist acts of Paris, Brussels, Istanbul, Saint Petersburg or Stockholm? How could we explain the ongoing wars, armed conflicts and bloodshed in the Middle East? How can we accept the attacks in the Coptic churches of Tanta and Alexandria about two weeks ago? Allow us to express, once again, our sincere condolences and the prayers of the Ecumenical Patriarchate to the Coptic community and to all the Egyptian people.

In order to understand what happens in our world today, let us reflect on the role of religion in humankind. Paradoxically, instead of the modernistic expectation of a “post-religious secular age”, our epoch is in fact becoming a “post-secular period” or even one of “religious explosion”. Religion appears as a central dimension of human life, both at the personal and the social levels. It claims a public role, and it participates in all central contemporary discourses.

The crucial functions of religion are evident at the following four areas of the human existence and co-existence:

Unfortunately, our contemporary world is marked either by relativism — deeply connected with secularism, — or fundamentalism, which is seen by many as a reaction to the first. Indeed, fundamentalism often sees itself threaten or even persecuted by relativism. While the last denies the existence of truth, the fundamentalism considers that its own truth is unique, and must therefore be imposed over the others, thus making impossible for religion to serve as a bridge between human beings. In recent History, the phenomenon of nationalism and of post-colonialism has turned religious extremism and fundamentalism into simple ideology, used for political purposes.

Unfortunately, the ongoing outburst of religious fundamentalism and terrible acts of violence in the name of religion, give to the modern critiques of religious faith arguments against faith, and support the identification of religion with its negative aspects. The truth is that violence is the negation of the fundamental religious beliefs and doctrine. True faith does not release humans from being responsible for the world, for respecting human dignity and for struggling for justice and peace. On the contrary, it strengthens the commitment of human action, it enlarges our witness for freedom and human core values.

The Mediterranean region has experienced in the past, for several centuries, a peaceful cohabitation of Jews, Christians and Muslims. This experience demonstrates that people from different religions can live together, finding the most fundamental message for humanity which unites, instead of being a source of division. It shows that religions can serve as bridges between people, as instruments of peace and of mutual comprehension, tolerance between human beings and of inter-religious dialogue.

For this reason, inter-religious dialogue recognizes the differences of religious traditions and promotes peaceful coexistence and cooperation between people and cultures. Inter-religious dialogue does not mean to deny one’s own faith, but rather to change one’s mind or attitude towards the other. So it can also heal and disperse prejudices and contribute to a mutual comprehension and the pacific resolution of conflicts. Biases and prejudices come from the misrepresentation of religion. By our presence today, during this important Conference, we would like to oppose at least one prejudice: Islam does not equal terrorism, because terrorism is a stranger to any religion. This is why inter-religious dialogue can chase away fear and suspicion. It is central for peace, but only in a spirit of mutual confidence and respect.

Last June, we had the privilege to preside over the Holy and Great Council of the Orthodox Church worldwide, which gathered in Greece, on the island of Crete. Among several issues, the Council rejected and condemned fundamentalism. Its Encyclical stressed that unfortunately “we are experiencing today an increase of violence in the name of God. The explosions of fundamentalism within religious communities threaten to create the view that fundamentalism belongs to the essence of the phenomenon of religion. The truth, however, is that fundamentalism, as “zeal not based on knowledge” (Rom 10.2), constitutes an expression of morbid religiosity.” Furthermore, the Council underlined that “Honest interfaith dialogue contributes to the development of mutual trust, and to the promotion of peace and reconciliation. (…) True peace is not achieved by force of arms, but only through love that “does not seek its own” (1 Cor 13.5). The oil of faith must be used to soothe and heal the wounds of others, not to rekindle new fires of hatred” (Encyclical, 17).

The credibility of religions today depends on their attitude towards the protection of human freedom and dignity, as well as on their contribution to peace. This is the presupposition not only of peaceful coexistence, but even the sheer survival of humanity. We can face these challenges only together. Nobody — not a nation, not a state, not a religion, nor science and technology — can face the current problems alone. We need one another; we need common mobilization, common efforts, common goals, common spirit. Therefore, we regard the present multifaceted crisis as an opportunity for practicing solidarity, for dialogue and cooperation, for openness and confidence. Our future is common, and the way toward this future is a common journey. As it is written in the Psalms: “Behold now, what is so good or so pleasant as for brothers to dwell together in unity?” (Psalm 133:1)

Your Eminence the grand Imam,

It is our deep conviction that the contribution of religions remains crucial in our common search for peace on the earth. It is precious, because for religions, real peace in the world is not simply the absence of war, but, essentially, the presence of freedom, justice and solidarity. What is needed for religion, is to guide people to the depth of this truth, to a change of mind and life and to mutual understanding. This is indeed the core of our religious traditions. For this reason, humanity is entitled to expect from us more than we are actually giving. This is the biggest challenge for religions: to develop their own potentials of love, solidarity and compassion. That is what humanity deeply expects from religion today.

Thank you for your kind attention!

His All-Holiness, Bartholomew I is Archbishop of Constantinople, New Rome, and Ecumenical Patriarch.