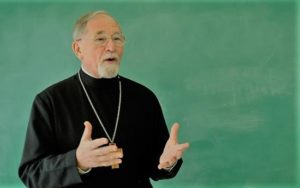 This week we remember Protopresbyter Thomas Hopko (March 28, 1939-March 18, 2015), and give thanks for the enormous impact of his ministry and teaching in North America and beyond.

As Archpriest John Behr said so powerfully during his homily at Fr. Thomas’s funeral three years ago, “How can one find the words—the appropriate words—to speak of one who was such a master of words? Fr. Thomas could speak so eloquently and so inspiringly—at length—in homilies and lectures, anecdotes and reminiscences; but he was a master story-teller as well as a master preacher and teacher.”

I did not have the blessing of having Fr. Thomas as a professor during my time as a student at St. Vladimir’s Seminary—he had long since retired as the seminary’s dean, rector of Three Hierarchs Chapel, and professor of Dogmatic Theology by the time I arrived on campus—so I am incredibly thankful so many of his books, articles, lectures, and podcasts are easily accessible. I have benefited enormously from them, and, of course, countless other Orthodox Christians have as well.

Indeed, the fact that Fr. Thomas’s works remain so easily accessible and popular is a testament to how gifted he was as a preacher and teacher. HisOrthodox Faith series (SVS Press) is incredibly popular for catechesis and adult education classes. Recordings of his lectures, including The Lord’s Prayer and Sin: Primordial, Generational, Personal, are requested often. In fact, later this spring SVS Press is bringing back two of the eight lecture albums Fr. Thomas produced through the press—The Word of the Cross andApocalypse—due to popular demand.  He also produced well over 400podcasts for Ancient Faith Radio, mostly within his signature series, “Speaking the Truth in Love.” His “55 Maxims for Christian Living” appear often on Orthodox websites, social media, and elsewhere.

Printed and recorded works are only a part of the legacy of Fr. Thomas, but thanks in part to them his ministry feels as alive as ever.

May the memory of Protopresbyter Thomas Hopko be eternal!