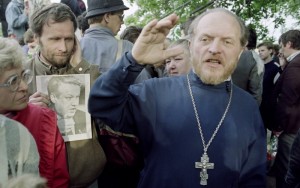 He defied the atheism of communism and the empty religious practices of Putinism. With Father Gleb Yakunin’s death on Christmas, Russia has lost a liberal voice of conscience.
On Christmas Day, the world lost an extraordinary man of faith who once went to prison for his Christian beliefs under an atheist state and later challenged both his church and the repressive entanglement of church and state under a regime that claims to celebrate religious values. When the Russian dissident and priest Father Gleb Yakunin died, outside the small circle of the liberal opposition and its sympathizers, he was almost as unknown in his homeland as in the West. His journey, which ended at the age of 80 after a long illness, is not only the story of one man’s lifelong battle; it is also the story of the complicated relationship between religion and power in 20th and 21st-century Russia, with all its ironic twists.

Raised in the Soviet Union, where atheism was a part of the communist civil religion, Yakunin converted to Christianity in college under the influence of the charismatic pastor and theologian Alexander Men and entered a Russian Orthodox seminary in 1958; only a year later, however, he was expelled, apparently having run afoul of the KGB. It was not a good time for the Russian church, restored from the brink of extinction in 1941 when Josef Stalin decided he needed God (or at least the faithful) on his side to rally the populace against the German invasion. While Nikita Khrushchev’s turn against Stalinism in the mid-1950s was the start of the Soviet “thaw,” Khrushchev’s quest for the restoration of “true Leninism” also meant a big chill for religion. There were mass closures of churches, mosques, and monasteries, and new taxes on religious facilities. A ban on the ringing of church bells, lifted in 1941, was reimposed. In 1961, Khrushchev publicly declared that soon the Soviet Union’s last priest would be shown on television. Yakunin was ordained the following year.

The anti-religion campaign slackened after Khrushchev’s removal from office in 1964, but Soviet citizens who were practicing Orthodox Christians still faced pervasive discrimination and harassment, and members of most other faiths fared even worse. People who baptized their children, got married in church, or attended religious celebrations were routinely singled out for retaliation in the workplace and in school, as well as public shaming and ridicule in “educational” meetings and in local newspapers.

In 1965, Yakunin and fellow priest Nikolai Eshliman sent an open letter to the head of the Russian Orthodox Church, Patriarch Alexei, decrying not only the persecution of believers but de facto church collusion in this persecution. Among other things, churches routinely complied with a requirement that all baptisms, church weddings, communions, and religious funerals be reported to the communist authorities—often with dire consequences for the participants. The letter, drafted by several lay writers, was originally meant to be a collective statement by as many as two dozen clergymen, including an archbishop. But everyone except Yakunin and Eshliman backed out. Copies of the letter were sent to senior members of the church hierarchy and to the Soviet government.

The reaction was predictable. In May 1966, Yakunin and Eshliman were defrocked by the Moscow patriarchate until they repented their criticism of church leadership; their appeal to the Synod was rejected.

Married like other Orthodox priests and a father of three, Yakunin found himself unemployable and forced to live on donations from sympathetic (and brave) believers. Undeterred, he threw himself into the Soviet Union’s then-burgeoning human rights movement, with a particular focus on the suppression of religious freedom—championing not only his fellow Orthodox, but also other faiths and sects. In 1979, he was convicted of “anti-Soviet agitation and propaganda” and spent five years in prison and Siberian labor camps—followed by two years in internal exile in the Far Eastern region of Yakutia.

All that changed with Mikhail Gorbachev’s reforms. In 1987, Yakunin was amnestied (his conviction was officially vacated four years later), allowed to return to Moscow, and restored to the priesthood in a newly unshackled church. Yet his passion for political change remained undiminished. A founding father of the Russian pro-democracy movement, he became a member of the first genuinely elected Soviet Council of People’s Deputies in 1990—where he helped draft landmark legislation protecting religious freedom—and then of the first parliament of the new independent Russia. In 1992, while serving as head of a parliamentary commission investigating the short-lived 1991 coup by Soviet hardliners, Yakunin undertook the dramatic step of making public KGB files that exposed extensive collaboration between the church and the KGB in the Soviet era. The reality turned out to be worse than even the most cynical of dissidents had suspected: In the upper echelons of the church, nine out of 10 clerics worked for the KGB. While the identities of these clerics were obscured by code names, it is virtually certain that the current church leader, Patriarch Kirill, was one of them.

The church was not pleased. In 1993, Yakunin was defrocked yet again—this time for defying a newly imposed church ban on members of the clergy holding political office—and then, in 1997, excommunicated and anathematized for the continued defiance of wearing priestly vestments despite being defrocked. He joined a schismatic “movement for the revival of Russian Orthodoxy,” which later took the name of the Apostolic Orthodox Church. In failing health, he continued both to attend opposition rallies and, until just six weeks before his death, to serve the liturgy. “He literally went underground to hold services,” Moscow-based dissident and journalist Victor Davidoff said in an email. “The only space he could get was in the basement of the office of For Human Rights,” a Moscow group that has faced its own share of harassment.

The Russia in which Yakunin died was one of the church triumphant. A 1997 law, while ostensibly protecting religious freedom, recognized the “special role of Orthodoxy” in its preamble (while also extending official recognition to Judaism, Islam, and Buddhism) and imposed multiple restrictions on more marginal religious groups. Under Vladimir Putin’s authoritarian regime, Orthodox Christianity has become, as Kommersant newspaper columnist Konstantin Eggertwrote a few years ago, “a new ideology to replace ‘the moral code of the builder of communism.’” Putin and other top Kremlin officials engage in ostentatious displays of public worship; Patriarch Kirill publicly calls Putin’s rule “a miracle of God.” Works of art deemed “sacrilegious” are vandalized and the exhibitorsprosecuted for offending religious sensibilities. In this new Russia where belonging to the church has become a badge of loyalty to the state, Yakunin remained as much of a rebel as he had been under the Soviet regime in which loyal citizenship required militant atheism. In a country with little history of religious liberalism, he called for a Christian democratic movement founded on the principles of freedom and tolerance.

This rebellion also led Yakunin not only to defend the women of Pussy Riot, the trio imprisoned in 2012 for a widely publicized anti-Putin song-and-dance protest in Moscow’s main cathedral, but also to embrace them as heroines for a new Christian age. Yakunin wrote a poem hailing the women as “guerrillas in a spiritual war,” as “punk-rock prophets” who spoke the truth at the altar—not only about Putin, but about churchmen who had chosen to serve Putin instead of God. In a long interview last January, Yakunin told the independent newspaperNovaya Gazeta that “Pussy Riot has a great, truly extraordinary mission”—spearheading a pro-freedom Christian reform movement—and went so far as to say, “As a priest, I can see that they have been given the gift of grace, special divine help.”

During the Pussy Riot controversy, some Western conservatives such as Baylor University historian Philip Jenkins criticized international support for the women as tone-deaf to the history of religious persecution in Russia: Russian Christians who had endured decades of militant atheism, Jenkins wrote, were understandably sensitive to sacrilege. Yet by and large, Christians like Yakunin, who had challenged and defied such persecution under Soviet rule, were the ones most sympathetic to Pussy Riot’s cause. Lined up on the other side were church hierarchs like Patriarch Kirill, who had enjoyed privileged status in Soviet times—and helped the Kremlin maintain the window-dressing of religious freedom for the benefit of the world. (Kirill represented the Moscow Patriarchate at the World Council of Churches in the early 1970s.)

“Father Gleb’s death, in addition to being a personal tragedy for us, marks the end of a beautiful era when there were still former prisoners in the church,” another dissident priest, Yakov Krotov, noted in a discussion of Yakunin’s life and death on Radio Liberty’s Russian service. “Now the church consists of people who only talk about how ‘we were persecuted’—even though they never were.”

As Yakunin’s admirers in Russia say their farewells, his dream of a Christian democratic movement in Russia seems more distant than ever. Twenty-five years ago, the world lost the great dissident Andrei Sakharov, one of the pillars of Russian secular liberalism; there is, perhaps, a bitter symbolism that almost exactly a quarter-century later, one of its leading voices of religious liberalism has been extinguished as well.