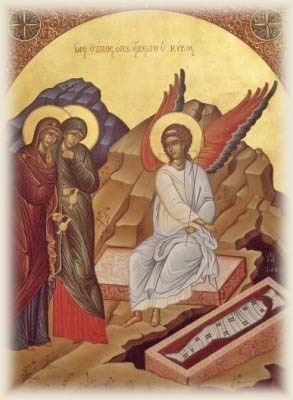 + N A T H A N I E L
By the Mercy of God, Archbishop of Detroit and the Romanian Episcopate of America

To our beloved clergy, monastics and pious faithful of Our God-protected Episcopate,

Grace, mercy and peace from God and from us our fatherly love and hierarchal blessing.

“The angel said to the women, ‘Do not be afraid, for I know that you are looking for Jesus, who was crucified. He is not here; he has risen, just as he said. Come and see the place where he lay.’” Matthew 28:5-6

CHRIST IS RISEN! TRULY HE IS RISEN!

Come: let us, too, visit the “place where he (Jesus) lay” in faraway Jerusalem at the great church now cradling his tomb. Let us light a candle and say, “How awesome is this place,” and return home and think that what we saw was indeed, “awesome.”  We will see an empty tomb amidst candles and incense and whispers, surrounded by souvenir hawkers and bazaars with olive wood crosses, plastic bottles of water from the Jordan, and “T” shirts proclaiming, “I visited the tomb of Jesus!” He, Jesus, nonetheless, is not there.

Yes, we, too can go to Jerusalem where he lay and not find him physically there but is he spiritually in us?  Can it be that the place we did have for him in our hearts has been cluttered with matters of this life of our day and age, with fears and skepticism and thus he finds no room in the “great church” of our souls. Is the fear that the few years of life are just that, a few years and then, “nothing.” No temporary judgment, no final judgment, no judgment at all…only nothingness after our eyes close or are closed for us; no “resurrection of the dead and the life of the world to come.” Perhaps we ourselves have become empty tombs, weak in faith, ”skeptical”?

We are informed by someone’s polls that there is a great decrease in believers in our day and age in our North American nations. In our day and age, could it be that we Christians have become afraid and empty even amidst the courageous martyrdoms happening around the rest of the Christian world?

The profound fear, that dreadful fear the women disciples had was duly overcome when the Lord did appear to the frightened disciples who had huddled together. “Do not be afraid’ he said, “Come and touch me…give me to eat.” It is the Lord, who now says to us: “Come, take, eat, drink of me. Be not afraid, for I am with you to the end of the ages.” Jesus who had been entombed dead is, however,  the “ One Who Truly Exists Ever the Same”  as is proclaimed on his icon and he has overcome our fears and Death itself.

What had motivated the brave women to hurry to the tomb to anoint the body of Jesus was not curiosity nor skepticism but love, a profound and trusting love overshadowing concern for any fear of bodily injury, of insults and derision. Saint John the Evangelist encourages us to overcome our fears, our skepticism, our indifference. “Think of the love that the Father has lavished on us, by letting us be called God’s children. My dear people, we are already the children of God but what we are to be in the future has not yet been revealed…we shall be like him because we shall see him as he really is.” (1 Jn. 3: 1-2)

How really is Jesus after his three days in the tomb? Saint Ignatius witnesses to us: “For I know that after his resurrection he was still possessed of flesh, and I believe that he is so now. When, for instance, he came to those who were with Peter, he said to them,” ‘Lay hold, handle me, and see that I am not an incorporeal spirit’. “And immediately they touched him, and believed being convinced both by his flesh and spirit.” “For this cause also they despised death, and were found its conquerors.” (To the Smyrnaeans)

Saint Polycarp the Martyr reminds us that a response is required of us. Wherefore, girding up your loins, serve the Lord in fear and truth as those who have forsaken the vain, empty talk and error of the multitude, and believed in him who raised up our Lord Jesus Christ from the dead, and gave him glory, and a throne at his right hand. He comes as the Judge of the living and the dead.” Thus, Saint Polycarp encourages us: “If we please him in the present world, we will also inherit the future world.” (To the Philippians 2)

Dearly beloved, returning from the tomb at the earthly Jerusalem let us be moved by profound love for him, the only-begotten of the Father, who for our salvation was born of the holy virgin, Mary, foretold of by the Holy Spirit through the prophets, offered himself as a new Isaac as a sacrifice, died, was buried and on the third day arose alive as a seal of the promise spoken of by Saint John the Evangelist that God’s love will raise us to become new children of God and see him as he really is.

Courage, beloved! Let any fear be cast aside as we proclaim to one another and the world “Christ is risen, he is not here!” Go and proclaim this to a skeptical world frightened by lack of love and faith in him who has conquered Death!

Christ is risen! And we shall rise with him.

+NATHANIEL,
Your father in Christ

His Eminence, Archbishop Nathaniel is Orthodox Christian Laity’s longest-serving spiritual advisor and a member of the Advisory Board.