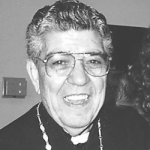 BOSTON, MA – One of the most prominent Greek Orthodox priest s in the United States, Protopresbyter George Papadeas, has died at the age of 93. Papadeas was a loving husband, a caring father and grandfather, a prolific writer and author, and a TNH contributor. In a phrase, he was the best of the best.

Even at 93 he would drive halfway across Florida – from South Daytona to Ocala – to conduct liturgies and administer sacraments. He served at St. Demetrios Church in Daytona Beach as pastor until “retiring” in 1983.

After his retirement from St. Demetrios, Papadeas established the Archangel Michael Greek Orthodox Church in Lecanto, FL. And he was conducting the same type of initiative in Ocala.

Moreover, there is virtually no Greek Orthodox parish in the United States without a copy of his Holy Week Services bilingual book, which Papadeas complied decades ago.

Born in 1918 in Altoona, PA, Papadeas was the son of a confectionery owner, and the grandson of an immigrant who after making his fortune returned to Greece and bought a farm, on which he planted 1,000 orange trees.

Papadeas was first Greek-American graduate of the Holy Cross Greek Orthodox School of Theology on March 25, 1942. He was assigned as the Deacon, Sunday School Director, and Greek School Teacher at the Cathedral in New York City.

Papadeas served as the Deacon to Archbishop Athenagoras of Blessed Memory until 1945, while still fulfilling his duties at the Cathedral.

Ordained a Priest on March 18, 1945, Papadeas served as an Assistant Priest under the Fr. Basil Efthimiou, a luminary of the Greek Orthodox Church, until September 1, 1950.

He was assigned by Archbishop Michael on September 1, 1950 to organize the first Greek Orthodox Church on Long Island, St. Paul’s in Hempstead.

Truly a monument to Orthodoxy in America, St Paul’s became one of the nation’s five leading parishes. The Sunday School had swelled to 1200 students, with a staff of 125.

While serving there, Papadeas published a complete series of Sunday School Books for Grades K-12.

As St Paul’s pastor, Papadeas presided over the blessed Manifestations of three Weeping Icons of our Holy Mother of God, the first of which was on March 16, 1960.

In 2000, on the occasion of the 40th Anniversary of The Weeping icon of the Theotokos at St. Paul’s, Papadeas penned and published Why Did She Cry, the in-depth, firsthand accounting of The Miraculous Manifestations.

And on St. Paul’s 50th Anniversary, Papadeas wrote a concise history of the parish’s origins.

In cooperation with Nicholas Andromidas, who wrote an “Easter Miracle Play,” Papadeas participated in presenting the first national Orthodox Easter program in the U.S. program in 1957.

The starring role was played by William Shatner of Star Trek fame.

Appointed by Archbishop Iakovos as the Dean of the Archdiocesan Cathedral in New York City on September 1, 1963, Papadeas spearheaded the major task of its reorganization.

Papadeas managed of all aspects of the development and construction of The Ionian Village Camp in Bartholomio, Greece, and was its organizer for the first two years. He was also Iakovos’ representative and chief liaison to the Church of Greece and the Greek government.

Moreover, Papadeas organized and served the first systematic Eastern Orthodox Parish at the USAF Base Hellenicon Athens, in order to serve the spiritual needs of the Orthodox military and the U.S. Embassy personnel stationed there.

Together with Fr. Leonidas Contos, Papadeas in 1964 became the first Greek-American priest to receive the Gold Cross of the Phoenix from King Constantine of Greece.

And along with Fr. Constantine Volaitis, Papadeas was chosen by Iakovos to visit the Orthodox Patriarchates of Constantinople, Antioch, Jerusalem, Alexandria, and the Church of Greece to procure Icons and other religious historical items to exhibit at the 1964 World’s Fair in New York City.

He organized the Eastern Orthodox Clergy Fellowship of Central and East Florida in 1982, and was elected as its first president.

Since assuming his duties as St. Demetrios’ Pastor, Papadeas initiated the Annual Memorial Service in New Smyrna Beach, FL, the site where 500 Greeks landed in 1768.

Also very notably, Papadeas compiled, translated (into English), and published The Greek-English edition of The Divine Liturgy of St. John The Chrysostom widely used in the pews of Orthodox Churches worldwide.

He also translated and published The Akathist Hymn, with The Brief Compline (used during the first five Fridays of Lent).

And those are but a few of the seemingly endless accomplishments that adorned this religious giant’s life.