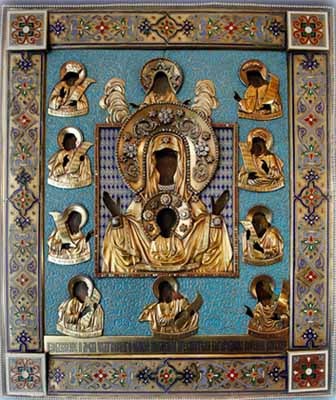 Found at the root of a tree in 1298, a revered religious icon with a long and colourful history will make its first-ever local appearance.

The Kursk-Root Icon is a religious painting considered to be one of the most ancient and holy icons in the Russian Orthodox church.

Housed in the Russian Synodal Cathedral in New York, the icon is currently on a cross-Canada tour that makes a stop at the Russian Orthodox church in Nanaimo on Monday.

“Central to orthodox religious practice is iconography or images,” said Philosoph Uhlman, a priest at the local chapter of the Russian Orthodox church.

“It’s absolutely essential to our religion that we have images. We consider them windows to heaven,” he said.

“We look at the icon and it brings us into a relationship with the heavenly.”

The icon is a wood panel and is something like a portable fresco, covered in plaster and then painted with an egg tempera.

No one knows who originally painted the icon, but the religious story of how it was discovered goes back to 1295.

The city of Kursk had been sacked and devastated by Tatar raiders and was subsequently frequented by hunters from nearby Rylsk.

One hunter wandering in the area found the painting at the root of a tree, the story goes, and when he picked it up, a stream of water gushed forth.

That spring was later associated with healings, said Uhlman, which caused the icon to be venerated as a holy object.

From there the hunter took the painting back to his home town, but it reportedly kept disappearing and returning to the tree where it was found. To solve the problem, it was decided that a chapel would be built on the site and the icon would be housed there.

The site is now home to a large monastary called the Kursk (or Koryenna, to the Russians) Root Hermitage, built in 1597 by Tsar Theodore Ivanovich of Moscow.

In 1918, during the Russian Civil War, the communists tried to steal the icon and it was taken with the anti-communist White army and secreted away into various refugee camps, said Uhlman.

It found a safe home in New York in 1951, where it remains when it is not on tour worldwide, though that is only for “about a week” each year, he added.

As for how the icon has finally made its way to Nanaimo, Uhlman said it was facilitated by the archbishop of the Russian church in Montreal.

“He was arranging for most of his churches across Canada to be visited by this icon, and we were feeling very privileged because we got added to that list,” he said.