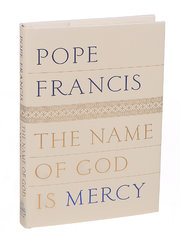 During his training as a Jesuit priest in the 1960s, Jorge Mario Bergoglio — who, decades later, would become Pope Francis — spent three years teaching literature and psychology in his native Argentina. He taught the classics, like “El Cid,” but when his students expressed an interest in authors like Antonio Machado and Fernando de Rojas, he taught them, too, as a way of nurturing a love of literature in his pupils. He also encouraged his students to write, and had his friend Jorge Luis Borges read their stories.

This gift for teaching — along with his inclusive vision of the world, and his warm, embracing manner — have been hallmarks of the pope’s whirlwind tenure thus far in the Vatican, and they also inform his new book, “The Name of God Is Mercy,” a series of revealing conversations with Andrea Tornielli, a Vatican reporter and correspondent for La Stampa.

The main theme of the book is mercy — and Francis’s reasons for proclaiming a Holy Year of Mercy. As the journalist Paul Vallely noted in a recent biography (“Pope Francis: The Struggle for the Soul of Catholicism”), “the need for forgiveness and for God’s mercy have been his dominant theological refrains, both before and after he became Pope,” and Francis speaks about the subject with a depth of emotion that comes from his years ministering to the poor in the slums of Buenos Aires.

The centrality of mercy, Francis says, is “Jesus’ most important message.” Mercy is essential because all men are sinners, in need of God’s forgiveness and grace, and it’s especially necessary today, at a time when “humanity is wounded,” suffering from “the many slaveries of the third millennium” — not just war and poverty and social exclusion, but also fatalism, hardheartedness and self-righteousness.

The theme of mercy, it turns out, also provides Francis with a metaphor for articulating his broader aim of shaking up the Roman Catholic Church, which he laid out in detail in a voluminous document called “Evangelii Gaudium” (“The Joy of the Gospel”) that was issued in November 2013. That document — a manifesto, really — advocated decentralizing power in the church, condemned economic injustice and called for focusing on the needs of the marginalized and disenfranchised.

Echoing the beliefs of St. Francis, whose name he took, it called for a church devoted to the poor, a church that returned to its roots and the original healing ministry of Jesus. It was critical of self-righteous bureaucrats who would glorify themselves rather than Christ, and deplored those “dour judges bent on rooting out every threat and deviation” from doctrine.

In “The Name of God Is Mercy,” Francis speaks succinctly — and with refreshing forthrightness — about these same matters, chastising “scholars of the law” who “live attached to the letter of the law but who neglect love; men who only know how to close doors and draw boundaries.” Instead, he urges people to think of the church as “a field hospital, where treatment is given above all to those who are most wounded.” Often speaking here more as a pastor than as the vicar of Christ, he emphasizes moral sincerity over dogma, an understanding of the complexities of the world and individual experience over rigid doctrine.

As a scholar and savvy church politician, Francis grounds his arguments in theological precedent, including the words of earlier popes. His views on mercy draw upon — or are informed by — writings on the subject by Aquinas, Merton and more recent scholars, like Cardinal Walter Kasper (the author of another book on mercy, who has proposed that the church create a “penitential path” to bring divorced Catholics back into communion with the church). Francis is also skilled at using biblical examples and parables (like the familiar story of the Prodigal Son) to illustrate his arguments.

On some matters, Francis is utterly direct. Of the poor, the homeless and those “immigrants who have survived the crossing and who land on our shores,” he says, “we touch the flesh of Christ in he who is outcast, hungry, thirsty, naked, imprisoned, ill, unemployed, persecuted, in search of refuge.”

On the controversial topics of homosexuality and divorce, he proposes no doctrinal changes but, as he’s done in earlier statements and interviews, urges that the church take a welcoming approach to all — embracing understanding, tolerance and compassion. Asked about homosexuality by Mr. Tornielli, he repeats his much-quoted remark “Who am I to judge,” adding that “before all else comes the individual person, in his wholeness and dignity.”

The pope is most critical of those eager to cast stones. Pride, hypocrisy and the urge to judge others in terms of “preconceived notions and ritual purity” are the targets of his ire. He has chastised church bureaucrats for their “theological narcissism,” and he says in this book that “we must avoid the attitude of someone who judges and condemns from the lofty heights of his own certainty, looking for the splinter in his brother’s eye while remaining unaware of the beam in his own.”

An avid reader (he has said that his favorite authors include Borges, Dostoyevsky and Gerard Manley Hopkins) and a fan of Italian neo-realist movies, the pope has an easy conversational style that moves effortlessly between folksy sayings and erudite allusions, between common-sense logic and impassioned philosophical insights. He is given to memorable metaphors — like urging priests to go out in the world and be “shepherds living with the smell of the sheep.” And here, he discusses how sin is “more than a stain” that can be removed by a trip to “the dry cleaner” — but a wound that “needs to be treated, healed.”

The ease with which the pope speaks to the concerns of ordinary people, as well as his humble lifestyle (living not in the Apostolic Palace, but in a modest Vatican guesthouse, and traveling in a tiny Fiat car), is rooted in a heartfelt sense of humility. “A priest needs to think of his own sins,” he says in this book, “to listen with tenderness, to pray to the Lord for a heart as merciful as his, and not to cast the first stone because he, too, is a sinner who needs to be forgiven.”

The Name of God Is Mercy, By Pope Francis, Translated from the Italian by Oonagh Stransky, 151 pages. Random House. $26.

A version of this review appears in print on January 11, 2016, on page C1 of the New York edition.