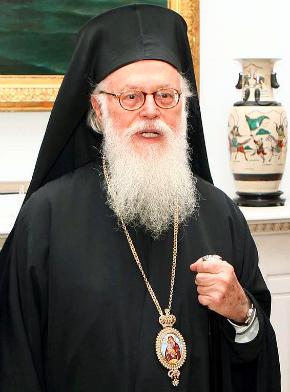 Anastasios, the archbishop of Tirana and the primate of the Autocephalous Albanian Orthodox Church. Licensed under CC BY-SA 2.0 via Wikimedia Commons.

During the 1990s, perhaps 150,000 people perished in the hellish violence that raged over the Balkan peninsula. Al­though the conflicts were largely defined by ethnic differences, religion played a critical role in the three-sided war be­tween Orthodox Christians, Roman Catholics, and Muslims. Armed gangs would burst into a house and demand that residents make the sign of the cross. Your life could depend on whether you made the horizontal bar from right to left (Orthodox) or vice versa (Catholic). Across Kosovo and Bosnia-Herzegovina, ancient places of worship were desecrated and their artistic treasures vandalized.

After such horrors, it might seem unthinkable to find signs of hope in the region’s religious life, but some forceful individuals demand our attention. One is Mustafa Cerić, the Islamic grand mufti of Bosnia. In the worst of the violence, his faith not only survived but grew and broadened. As he said, “When you are faced with death and when you see that humans do not help you, and you are left alone for four years in besieged Sarajevo, therefore you cannot live alone, you have to seek some help.” He has worked diligently to promote understanding between Europe’s Muslim, Jewish, and Christian leaders.

Mustafa Cerić speaks force­fully to European Muslims, who face the twin seductions of secularism and Islamist extremism. Muslims, he says, must reject any view that “the only hope is in the Muslim past as a way of life and a goal of history.” In words that apply across religions, he urges Muslim migrants to Western Europe to follow three fundamental laws: learn the language of your host country; obey its laws; and try and do something good for that country.

Although the nation of Albania was not directly involved in the wars, ethnic Albanians suffered heavily from the fighting in neighboring Kosovo. Albania itself, moreover, recovered only slowly from the horrendous communist tyranny of Enver Hoxha, a self-proclaimed Stalinist who had a deep animus against religion of all kinds. In 1967 he declared Albania the world’s first wholly atheist state, and persecutions were wide-ranging and ferocious. Catholics and Muslims were targeted for harsh treatment. In its way, then, postcommunist Albania needed a thoroughgoing spiritual reconstruction no less than Bosnia.

The most impressive leader of this process has been Anastasios, the archbishop of Tirana and the primate of the Autocephalous Albanian Orthodox Church. (He is by origin an ethnic Greek.) When he took office in 1992 he faced a nightmare situation. His see had been vacant since 1973, and virtually all its institutions formally closed. Albanian Orthodoxy survived in a diasporic existence, with its overseas capital in Boston. The country’s Orthodox Church, claiming the loyalty of perhaps 15 percent of the population, faced extinction.

First and foremost, Anastasios is a polymath scholar, with interests in history, linguistics, and comparative religion, but it is difficult to imagine any religious leader accomplishing so much practical real-world good in such a short time. In 20 years he reorganized several hundred parishes, a process that often demanded whole new buildings. Monasteries flourish once more. The archbishop restored the theological academy and seminary and ordained hundreds of new priests. A whole range of Orthodox media now operate, including newspapers and radio stations.

The church’s social outreach and charitable works have been spectacular. The results include new schools and medical clinics, which serve people without regard to religious affiliation. When the wars in former Yugoslavia drove thousands of refugees into Albania, the Orthodox Church took the lead in humanitarian efforts, with Muslims the main beneficiaries. Anastasios works for harmony with the country’s other faiths, including its majority Muslim population and its crucial Sufi orders.

Ironically, Anastasios’s accomplishments seem to contradict Mustafa Cerić’s warning against a return to the Middle Ages. In his comprehensive religious, educational, and social activism, Anastasios sometimes seems like a theocratic throwback to the Byzantine Middle Ages.

But he had few options. In past centuries, bishops simply had to take on so many areas of enterprise because the state was not adequate to the task, and that was the situation Albania found itself in following the depredations of communism. Civil society had been obliterated, and only the church could hope to recreate it.

But Anastasios found other, strictly modern inspiration for his work. Before returning to Albania in 1992, he had spent a decade supervising the well-established Orthodox congregations in East Africa. As the acting archbishop in charge of Kenya, Uganda, and Tanzania, he built up a church from the grass roots, training and ordaining clergy, translating the scriptures, and developing new parish churches and schools.

His time in Africa constituted perfect on-the-job training for his later work in Europe. What he learned in building a surging new Christianity in the Global South could now be applied to restoring an ancient European church, with its roots in the Roman Empire.